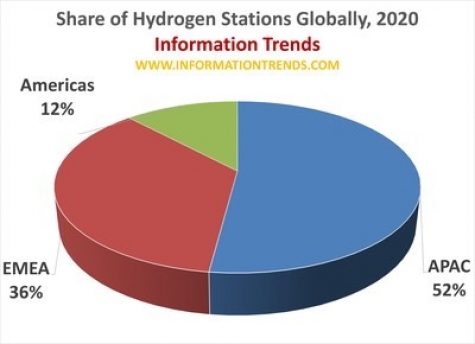 The hydrogen fueling station market is witnessing a dramatic acceleration in growth, with 584 hydrogen stations deployed by the end of 2020, according to a study released by Information Trends, a market research company.

The study, "Global Market for Hydrogen Fueling Stations, 2021," says the number of countries that have deployed hydrogen stations now stands at 33, with more countries gearing up to enter the market.

The deployments are a positive sign for the uptake of hydrogen fuel cell vehicles from Hyundai, Toyota and Honda, said Naqi Jaffery, president and CEO of Information Trends.

In the next few years, he added, hydrogen fuel cells will be widely used to drive trains, aircraft and maritime vessels.

Japan is a clear global leader in deployments with close to 150 hydrogen stations, Jaffery said, but the fastest growth is in China where more than a hundred hydrogen stations have gone into operation.

By 2035, the study said, hydrogen stations will blanket most of the U.S., Western Europe, China, Japan and South Korea. The sums of money being poured into hydrogen station deployments are staggering, mostly raised through public-private partnerships.