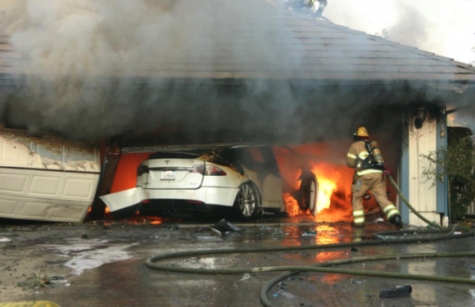 Firefighters respond to a Tesla Model X crash in Lake Forest, CA, in August 2017. Provided to NTSB by the Orange County Sheriff’s Office.

Electric vehicle manufacturers should provide more specific information to first responders and tow truck drivers on how to cope with lithium-ion battery fires, which continuously reignite even after being doused with water, the National Transportation Safety Board said in a report released Jan. 13.

The NTSB examined four fires in the U.S. involving lithium-ion batteries from August 2017 to August 2018. Three of those started after crashes and a fourth ignited while the vehicle was operating. After all three crashes, the damaged batteries reignited after firefighters extinguished fires and continued to reignite at least 15 times.

The agency said first responders have adequate instruction from manufacturers on how to disconnect high-voltage batteries after crashes, but need more guidance on how to suppress thermal runaways---a heat-producing chain reaction often caused by “stranded energy” left in the undamaged portion of a battery. Manufacturers should also provide guidance to firefighters on how to suppress fires for specific vehicles, the report says.

Andrew Klock, emerging issues manager for the National Fire Protection Association, said he hopes the NTSB report will help educate first responders on the safety risks posed by lithium-ion battery fires. He said his organization has trained 250,000 firefighters on suppressing electric-vehicle fires, but there are 1.2 million in the U.S. and the majority of them are volunteers.

“I hope there is definite change,” Klock said. “I hope they come up with more emergency response guides and better safety features on the vehicles.”

Battery-powered cars are rapidly replacing electric vehicles as the dominant mode of surface transportation. According to an article in the latest issue of NFPA’s Journal, the number of electrical vehicles on the road is expected to grow from 3.1 million in 2017 to 130 million in 2030.

The NTSB says it started working with the Fire Protection Association to train first responders and tow operators on how to deal with lithium-ion batteries in late 2011, after a Chevrolet Volt caught fire three weeks after it had been wrecked in a crash test.

A short video the NTSB released in conjunction with the report shows firefighters are not always sure how to control electric-vehicle fires.