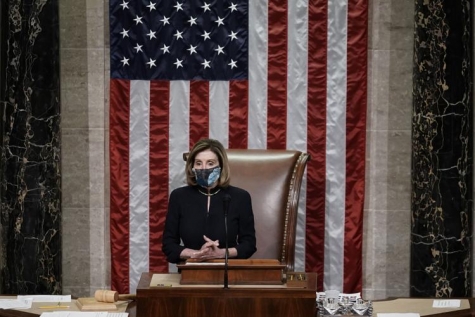 Speaker of the House Nancy Pelosi, D-CA, leads the final vote Jan. 13 of the impeachment of President Donald Trump for comments he made before an angry group of protesters stormed the U.S. Capitol a week earlier. J. Scott Applewhite

...from the floor broke down along rhetorical party lines.

Democrat Rosa De Lauro of Connecticut, for example, said Trump “unleashed horrific violence” on the Capitol, while Democrat Kathy Castor of Florida called Trump’s words and actions “the most depraved betrayal of the Constitution by a president.”

Republican Dan Bishop of North Carolina, on the other hand, said the Democrats did not “specify any inciting language” that led to the breach of the Capitol.

Republican Tom Cole of Oklahoma said the current process moved too quickly with no hearings or witnesses.

“They are rushing to divide us rather than unite us,” Cole said. “We should find a new way forward to celebrate a new president rather than impeach an old president.”

The Capitol and the area around it were heavily fortified with fences, blockades and National Guard soldiers Jan. 13 in an effort to prevent any similar actions. No crowds were seen gathered outside before the proceedings began.

Jan. 12, the House voted 223-205 in favor of a non-binding resolution asking Vice President Mike Pence to invoke the 25th Amendment, which would entail him and Cabinet members to vote on Trump’s fitness to remain in office.

Kinzinger of Illinois, who also voted for impeachment, was the only Republican to vote in favor of the resolution.

Pence declined, sending a letter to House Speaker Nancy Pelosi, saying, “I urge you and every member of Congress to avoid actions that would further divide and inflame the passions of the moment.”

It is unclear now when the impeachment charge will be forwarded to the Senate, which does not return to session until Jan. 19, one day ahead of Biden’s inauguration. Several Democrats have suggested waiting at least 100 days so that Biden will have at least three months to focus solely on his legislative agenda.

Trump was acquitted by the U.S. Senate in January 2020 after being impeached by the House in December 2019. If he is convicted, it would prevent him from ever holding federal office again.