How Many Electric Cars Are Built/Sold Each Minute by Brand?

Written by Steven Loveday, Inside EVs 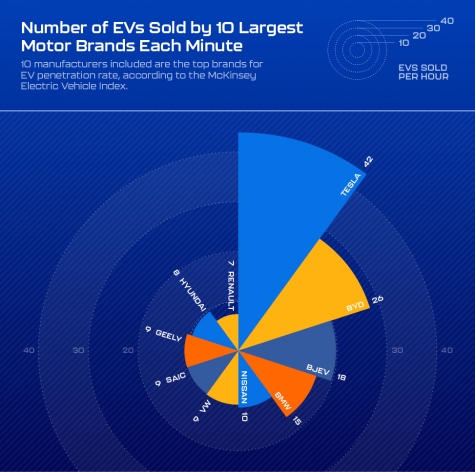 The data looks at which automakers produce and sell the most electric and gas cars per minute. However, arguably much more important is which EV makers sell the most cars per hour by brand and country.

It comes as no surprise Moneyshake's data proves Tesla takes the prize for selling the most EVs per year, at 370,000 for the time period related to the study. This works out to some 42 Tesla cars sold per hour across the globe, or a bit less than a car per minute.

For comparison, Toyota produces 19.9 cars per minute, or 1,194 per hour. However, if we looked at Toyota's EV sales per minute, the number would be essentially non-existent.

According to Moneyshake, the top five auto manufacturers by production per minute are as follows:

As an aside, Moneyshake says China manufactures more cars per minute than any other country, at a whopping 48.9.

Moneyshake also looked at automakers' revenue per minute. Based on its data, the results are as follows:

Finally, the publication analyzed how many electric vehicles are sold by country...