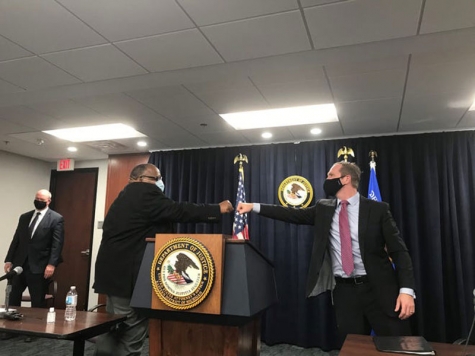 The UAW and the U.S. government reached a formal agreement Dec. 14 designed to guide the labor organization into the future after a long-running criminal probe that unearthed corruption in the ranks up to and including two presidents of what had historically been one of America's cleanest unions.

As part of the deal, which a federal judge still must approve, an independent monitor will be appointed and union members will determine how their leaders are elected under a civil settlement announced between the UAW and U.S. Attorney's Office.

"Today, we are joining together to announce that the UAW, one of the largest and most prestigious unions in the world, is now on a pathway to be free of corruption," U.S. Attorney Matthew Schneider said at a news conference in downtown Detroit.

The period designated for the monitor is six years, although it could be shortened or lengthened depending on the need. The monitor, whose costs are to be borne by the union, will not be involved in oversight of normal contract bargaining. Third-party oversight of contracts was one of the possible reforms discussed, but it did not become part of the agreement.

UAW President Rory Gamble, speaking at the news conference in the office where Schneider presides over the Eastern District of Michigan, said details of a membership vote to determine how leaders are selected will be forthcoming. However, members will have the option of keeping the current election-by-delegate process. The monitor will oversee the election.

Schneider said the consent order provides for genuine democratic reform within the union. He said it was appropriate to be handled this way because the UAW was dealing with issues of corruption but was not infiltrated by organized crime.

Schneider said the federal criminal investigation into the UAW is over, although other angles continue, including into Ford and Fiat Chrysler Automobiles. The investigation has resulted in the convictions of 15 current or former UAW or FCA officials.

Schneider noted two payments the union has made or will make related to joint training centers the union shared with the Detroit Three, including $15 million the UAW has already paid to worker training centers for improper chargebacks at two of the three, and $1.5 million to be paid to the IRS for administrative fees.

In his joint appearance with Gamble, Schneider emphasized the importance of the moment and praised the UAW leader for...

...his poise and leadership during negotiations. He said the consent agreement recognizes the "significant strides" the union has made in response to the investigation.

The two men, wearing masks because of COVID-19 protocols, stretched out their arms to make a socially distant fist bump at the end of the news conference.

Schneider noted the toll the scandal has taken.

“The conduct by these corrupt and criminal individuals has scarred the UAW, and it’s severely undermined the trust that the UAW's membership has had in its leaders. This criminal investigation and this prosecution has revealed a need to reform and to clean up and to return to greatness the storied United Autoworkers Union,” Schneider said.

Gamble said the consent agreement represents justice and builds on the reform work already undertaken, which includes the appointment of an independent ethics officer.

“This is a collaborative effort between the government and UAW leadership to achieve our joint goals to ensure that our union is clean, free from misconduct, conducted with integrity and always for the benefit of its members and especially to restore the full faith and confidence of our members in their union,“ Gamble said.

Gamble noted the union's leadership has expelled members involved in the scandal and would take "swift and thorough" action if more bad actors come to light. He said the union acknowledges that its financial controls were inadequate to deter the misconduct that happened as part of the scandal.

"Over the past year, the UAW has proactively weeded out individuals who put their personal benefit over our members' interest and who abused their positions of trust to defraud our union and our membership," Gamble said.

Schneider, who began discussions with the union leadership in the summer, had downplayed...

...a federal takeover of the union, which would have been a much harsher action. In August, he told the Free Press he wanted the union to run itself.

"We can set a goal to get [the reforms] resolved by the end of this year … by the end of 2020 we have the union in a good place with good leadership," Schneider said then. "I don’t want to run the union. My goal is to get the UAW in a position that it runs itself and that the leadership of the UAW is not corrupt."

Schneider had told the Free Press union democracy is “something I’m very interested in … as to having the members of the union pick their leadership.”

On Dec. 14, Schneider explained why he feels the issue is key.

"For over 70 years, the administrative caucus of the UAW, also known as the Reuther caucus, has controlled elections within the union. This system has added to the UAW’s problems,” Schneider said.

It's an area of particular interest to union activists, who have looked to the Teamsters' experience with union democracy as a way to keep the leadership accountable. The UAW currently picks its top leaders by a delegate system at its conventions, although local leaders are selected through direct elections.

Union democracy is often described as one member, one vote, and could involve a national election if it were handled as it is at the Teamsters.

Scott Houldieson, chair of the UAW activist group Unite All Workers for Democracy, said he is cautiously pleased with what he's heard about the agreement, which he hadn't yet had a chance to review.

"I'm pleased that the authority for correcting the problems that exist with the UAW are being placed where it belongs, in the hands of the UAW," said Houldieson, an electrician at Ford's Chicago Assembly Plant and a member of UAW Local 551.

The group has been advocating for...

...direct elections of the UAW's top leaders, and Houldieson was asked what he thought about the agreement stopping short of ensuring that outcome.

"I'm all for democracy, but one of the things about democracy is that all perspectives need to have a chance to be presented to the membership," he said, noting that Gamble had pledged to educate members on the issues.

Democratic U.S. Rep. Debbie Dingell of Dearborn, MI, weighed in on the agreement, noting its significance.

“Generations of UAW workers have labored long hours to keep our nation at the forefront of the global auto industry. With this agreement, the UAW has chosen the accountability and transparency necessary to restore the faith of their loyal members in Michigan and around the country,” Dingell said.

The corruption scandal has been seen as both an example of greed and as an abuse of power among those involved. The corruption included misuse of worker training funds for fancy dinners and booze, a Ferrari, jewel encrusted pens and even a mortgage. There were kickbacks on watch contracts. Union funds were used to pay for golf and lengthy rental stays in Palm Springs. Millions of dollars were involved.

It ensnared both former union leadership and Fiat Chrysler Automobiles executives. While only former FCA officials have faced charges, Schneider said Ford is under investigation, too.

General Motors, although not a target of the investigation, has been connected through the UAW-GM Center for Human Resources, a large complex on the Detroit River that has now been sold for...

...an undisclosed price, and through a former GM board member, Joe Ashton. Ashton was also a UAW vice president and has been sentenced to 30 months in prison for his role.

Convictions netted during the investigation included two ex-presidents of the union and a onetime lead labor negotiator for the automaker.

The scandal has also been the basis for a wide-ranging lawsuit filed against FCA. GM claims its rival corrupted the bargaining process in order to hurt it and force a merger, which did not occur. That suit, dismissed by a federal district court judge, is currently on appeal. FCA has called it meritless.

Erik Gordon, a law professor at the University of Michigan’s Ross School of Business, said the settlement represents a compromise for the federal government on changing the union's system of electing leaders.

"Instead of the government forcing the union to allow members to directly elect leaders, it is letting the union put the question to a vote. Union leadership won the point and can lobby hard to keep the old system," Gordon said, noting political considerations could have had an impact.

"The settlement is watered down from what was expected. The government may be anxious to get what it can before the new administration takes over in Washington, and union leaders seem to have taken advantage of that," he said.