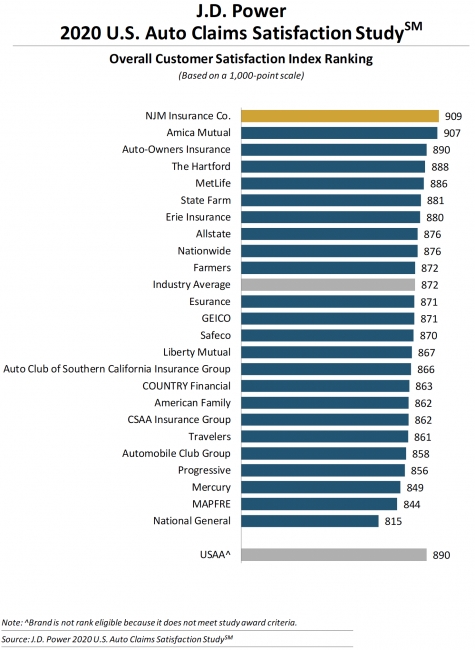 J.D. Power’s annual survey of consumers who had settled a claim within the previous six months found satisfaction with their insurer and the process has improved.

New Jersey Manufacturers (NJM) Insurance and Amica claimed the top spots in this year’s J.D. Power Auto Claims Satisfaction Study, based on responses from 11,055 insured consumers who had settled a claim within the six months prior to taking the survey.

Amica is one of only four insurers---along with Auto-Owners, Erie and USAA---to score above the industry average in the ranking every year since 2015. (NJM Insurance was above average for five of those years but did not participate in the 2018 study.)

J.D. Power says the downturn in claims this year gave insurers “some breathing room to refine their customer experience,” resulting in an industry average score this year of 872, on a 1,000-point scale, up four points from last year. It was the third year in a row of growth in the industry average, which was 857 in 2015.

The study found that consumers using one of their insurers’ direct repair shops were more satisfied (888) than those who did not (844).

Country Financial saw the biggest decline in its score this year, dropping from 896 and second place last year, to a below-average 863 this year.

Though it has not attained an above-average score in any year, National General saw the biggest jump among insurers this year, climbing 37 points from its score last year to 815 this year, still the lowest score among the 25 insurers in the study.

Esurance, a brand Allstate is eliminating this year, also has never had an above-average score---Mercury is in that category as well---but is the only insurer...