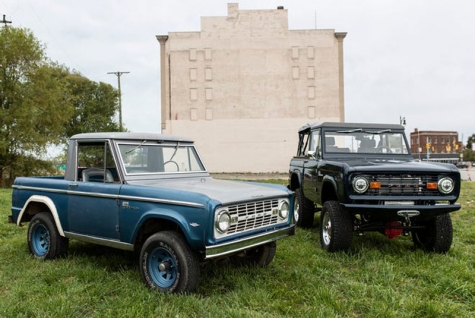 Preproduction models rolled off the assembly line in September. Deliveries are targeted to begin in June 2021.

In 2016, as he was planning to launch his company, Burgett went to Texas with his dog, Bronco, to close a deal on the very first Ford Bronco ever built from the second owner.

Vinnie Yakubanski, 75, is a retired geologist who owned a logging company and part of a Ford dealership. He lives in Sportsman's World on Possum Kingdom Lake in Palo Pinto County, TX, and talks about buying the original Ford Bronco for just $100 in 1978. He won't reveal how much Burgett paid for it in 2016.

"It was just a utility vehicle used to do ranch work, like putting in pipelines and fixing windmills," Yakubanski told the Free Press. "[Racing legend] Carroll Shelby owned a ranch and that Bronco was down south of Alpine, TX. They used it on that ranch and wore it out."

Bronco VIN 000 was in the repair shop so much that Yakubanski offered to buy it.

"I was a partner in the dealership. We were repairing it once a month or more. They were beating the hell out of it. And it was getting wore out," he said. "I told the ranch foreman it was time to get a new vehicle. I had a brand new 1978 Ford Bronco sitting on the showroom floor."

So Yakubanski put the first Bronco in his garage and rebuilt it. It needed a lot of TLC.