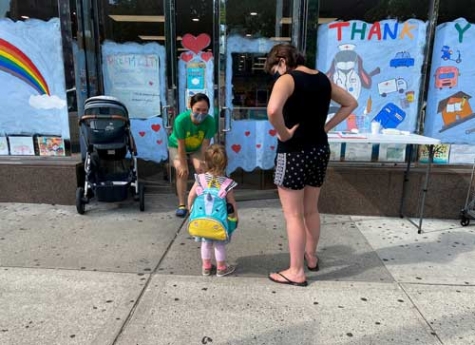 As employers across the country, including preschools, ask employees to return to the workplace, some are requiring employees to sign waivers in the event they contract COVID-19. Lindsey Nicholson via Getty Images

After spending a May day preparing her classroom to reopen for preschoolers, Ana Aguilar was informed the tots would not have to wear face masks when they came back.

What’s more, she had to sign a form agreeing not to sue the school if she caught COVID-19 or suffered any injury from it while working there.

Other teachers signed the form distributed by the Montessori Schools of Irvine in California, but Aguilar said she felt uncomfortable, although it stipulated that staff members would be masked. At 23, she has a compromised immune system and was also worried she could pass the coronavirus on to her fiancé and other family members.

Aguilar refused to sign, and a week later she was fired.

“They said it was my choice to sign the paper, but it wasn’t really my choice,” said Aguilar, who’s currently jobless and receiving $276 a week in unemployment benefits. “I felt so bullied.”

As employers in California and across the country ask employees to return to the workplace, many have considered and some are requiring employees to sign similar waivers, employment lawyers say. And many employees, mostly lower-wage and minority workers in essential jobs, are calling lawyers to complain about the waivers.

“These are illegal agreements that are totally unfair to workers,” said Christian Schreiber, a San Francisco lawyer who represents Aguilar and other employees.

The California State Legislature last year passed a law, AB-51, prohibiting employers from requiring employees or job applicants to sign away their right to pursue legal claims or benefits under state law. The law, which also prohibits firing any employee for refusing to sign, is being challenged in court by business groups.

Only a few employers have forced employees to sign liability waivers, at least partly because these waivers likely would be held unenforceable by courts, lawyers who represent employers say.

“Courts don’t recognize them because of the unequal bargaining power between employers and employees,” said Isaac Mamaysky, a partner at the Potomac Law Group in New York City. “With so many unemployed, people would sign just about anything to get a job.”

Another reason they are considered unenforceable: Workers who get sick or injured on the job generally are compensated through state workers’ compensation systems rather than through the courts, and state laws don’t allow employers to force employees to sign away their right to pursue workers’ comp claims, Mamaysky said.