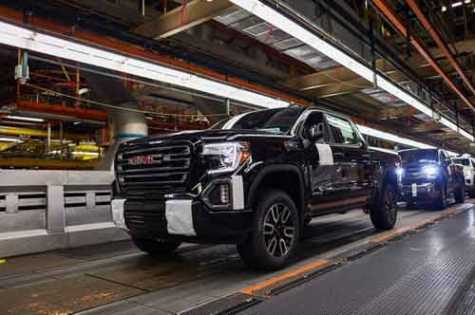 A GMC Sierra 1500 pickup on the assembly line May 14, 2019, at the General Motors Fort Wayne Assembly plant in Roanoke, IN.   Ryan Hake, General Motors

General Motors Co. has a problem with absenteeism at its vital truck plants just when it needs every single body it can get on the assembly line.

GM is working feverishly to replenish supplies of the in-demand pickups and full-sized SUVs after idling its U.S. factories from late-March through mid-May amid the coronavirus pandemic.

Take Fort Wayne Assembly in Indiana, where GM builds its Chevrolet Silverado and GMC Sierra full-size light-duty pickups. The plant has about 4,100 hourly workers and nearly 1,000 of them are off for various reasons---as many as 200 workers are off for COVID-19 related reasons.

So it is increasingly harder for GM to hit the daily build target of 1,290 pickups there. If you look down the assembly line, you'll likely see something that should never be, said a person familiar with the plant, but who is not authorized to speak to the media and asked to not be named.

"They’re at full schedule, but they have every single person on that assembly line, including management, and management is not supposed to be on the line,” said the person. “It’s all hands on deck, just to build trucks.”

To alleviate the problem, GM told union leaders at Flint Assembly, Fort Wayne Assembly and Arlington Assembly in Texas it will be adding hundreds of permanent workers to the plants, some starting in early August.

They will not be new hires, but rather GM workers laid off at other plants who will be given the chance to permanently transfer to one of the truck facilities.

"It is ... no secret that we have people on layoff from Detroit-Hamtramck and upcoming at Spring Hill, so it makes sense to shore-up our workforce in the important truck and heavy-duty SUV plants," said another person familiar with the situation but who asked to not be named because they are not authorized to share that with the media.

A GM spokesman did not comment on managers helping build pickups, other than to say GM is doing everything to address the production challenges in the plants while keeping workers safe during the pandemic.

“We are operating our plants as efficiently as possible while accommodating team members who are not reporting to work due to concerns about COVID-19 in the community," said GM spokesman David Barnas.

By month end, GM will have access to a wider workforce. Effective July 31, GM has said it will cut the third shift at its Spring Hill Assembly plant in Spring Hill, TN. The move impacts 680 workers there, 525 of whom are production and skilled trade employees. The cuts are the result of slow sales of the Cadillac XT5, Cadillac XT6 and GMC Acadia SUVs made in Spring Hill.

Previous Page Next Page »
Read 1210 times
More in this category: « AirPro Diagnostics Leadership Discusses Benefits of Scanning & How to Create a Profit Center Jeep Wrangler Teaser Hints at First-Ever Factory V8, Return Of Half Doors »
back to top