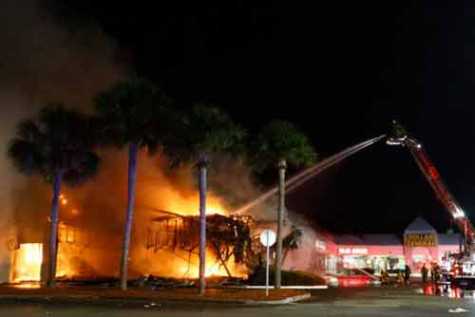 Police SWAT officers guard firefighters as they respond to a Champs Sports store after protesters looted and set the building on fire during protests May 31 in Tampa, FL. Luis Santana/Tampa Bay Times via AP

Rioting that erupted in cities across the country after peaceful protests mourning the death of George Floyd in Minneapolis may rival the 1992 Los Angeles riots to become the most costly civil disorder for insurers in U.S. history.

The civil disturbance in Los Angeles after the videotaped police beating of Rodney King in April and May 1992 caused $775 million in damages---or $1.42 billion in today’s dollars, according to the Insurance Information Institute (III.)

Those riots, however, were largely confined to one metropolitan area. Destruction and looting that erupted after Floyd’s death was reported in at least 25 cities, and spread into many suburbs as well.

“We expect this to be a significant loss event as the impact is being experienced in large and small markets across the U.S.,” said III spokesman Mark Friedlander. “However, because it is an ongoing event, it is premature to determine the volume of property loss that will be incurred.”

Rioting in Los Angeles in August 1965---the second costliest civil disorder---caused $357 million in damages, measured in 2020 dollars. Together, riots in Baltimore, Chicago and New York City in April 1968 caused $231 million in damages in today’s dollars.

By comparison, Hurricane Harvey in 2017 caused an estimated $20 billion in damages. Verisk’s Property Claims Service (PCS) over the weekend declared the riots a catastrophe event, which means it projects damages of more than $25 million. PCS hasn’t designated a civil disturbance as a catastrophe since the Baltimore riots in 2015.

PCS head Tom Johansmeyer said the riots sparked by Floyd’s death may be the first civil disorder tracked by PCS that includes more than one state.

Johansmeyer said “to better understand” potential riots from current rioting, it make sense to look at losses caused by civil unrest last year in Chile---which grew from protests over an increase in subway fares in Santiago. Rioting there caused insured losses of $2 billion. About a third of that came from property claims from a handful of large retailers.

Previous Page Continue reading »
Read 587 times
More in this category: « Ford, Volkswagen Sign Agreements for Joint Projects on Commercial Vehicles, EVs, Autonomous Driving Are Auto Sales Back on Track? May Depend on Automakers Throwing More Cash at Buyers »
back to top