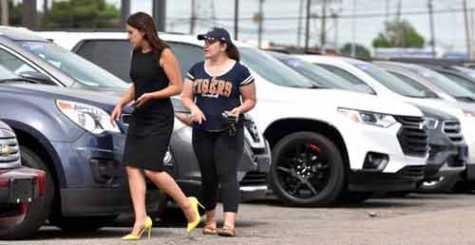 Auto sales are "booming" for dealer Walt Tutak at Matthews-Hargreaves Chevrolet in Royal Oak, MI, after he shut his showroom for eight weeks to help stop the spread of the coronavirus.

The dealership reopened May 18, the same week General Motors Co. progressively started to reopen its North American plants. While inventory levels are solid right now, he says, that could change in two or three months since it will take time for auto plants to get back up to their full production levels.

"It will take a while for the factories and the suppliers to get momentum going again," Tutak said. "There could be a shortage in a couple of months. There's definitely a strong recovery ... both in new and used cars."

The auto industry, a major economic driver and jobs machine in the Midwest, is cranking up. It took weeks of developing a restart plan to protect employees while battling potential supply chain interruptions, losing billions in revenue and profit and jumping into action to make medical supplies for the fight against the coronavirus. But Chevrolet Silverados, Rams and Ford F-150s are rolling down assembly lines once again.

Their foreign competitors also have restarted lines. Getting three-shift plants back to their normal schedule signifies the demand is returning, and it's time to start cranking out inventory before competitors seize the chance to steal customers.

"They do not want to be in a position to give away sales to their competitors because they don’t have the inventory," said Jessica Caldwell, executive director of insights for market researcher Edmunds. "That is the worst position to be in especially for the truck market because the margins are so high."

Doug North, president of the North Brothers Ford dealership in Westland, MI, is worried about running out of F-150s and Explorers next month, as demand for trucks and SUVs has remained steady since May: "If we have a good June and July, with regard to Ford stores in southeast Michigan, we'll be thin on a couple of product lines."

GM doesn't see demand falling this year on the truck side, said Phil Kienle, vice president of GM North America manufacturing and labor relations. In the first quarter, Chevrolet Silverado sales jumped 26% to their highest level in at least the last five quarters, according to Cox Automotive. GMC Sierra sales were up 31%.

"We are running where there’s demand for sure," he told The Detroit News. "The trucks have been strong all year and continue to be strong, so we definitely want to supply that demand."

There have been hiccups as auto plants restarted and implemented extensive---and unprecedented---protocols to guard against COVID-19 infection. Some plants had to be shut down for cleaning when cases were caught. GM had to delay the addition of shifts at truck plants because some of its Mexico-based suppliers weren't yet up and running.

Step one in the restart has been ensuring that workers feel safe in the plants, that they follow strict health and safety guidelines, and then making sure the supply base can accelerate production in tune with the automakers.

"Obviously, getting all of our plants back as fast soon as possible is what we want to do but not at the detriment of our employees," Kienle said. "In a perfect world, we would be up day one all three shifts, but that’s just not our reality. I think we brought them back in a controlled fashion and safe fashion as best we could."

Irene Santangelo's lease expired on her Chevrolet Equinox on May 23. "But because of COVID," she wasn't able to look for another car until she came out to Matthews-Hargreaves Chevrolet on June 5. It felt "wonderful," she said, to be out and about shopping again.

"I've been frustrated for three months that I couldn't go out of the house," said the Madison Heights, MI, resident, who's weighing another Equinox or a red Blazer. "I love the new Blazer."