Auto Workers Worried About Returning to Plants During Pandemic 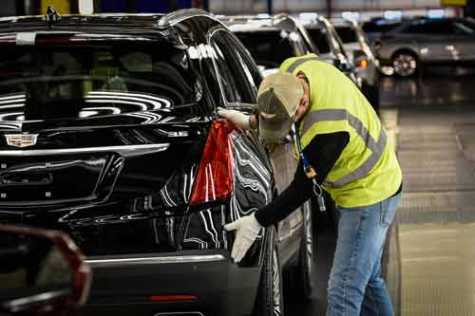 GM, Ford and Fiat Chrysler are all resuming plant operations on a limited basis May 18.

As armed protests at Michigan’s state capitol in Lansing calling for an end to stay-home orders capture attention around the world, auto workers are expressing serious apprehension about going back to work despite claims from automakers they have taken steps to make assembly lines safe.

The concern---and alarm---was underscored last week when a Fiat Chrysler worker at the company’s big assembly plant in Sterling Heights, MI, tested positive for the virus then returned to work on the line.

FCA later blamed the return on a missed communication but UAW officials said privately the incident only underscored the ongoing concern workers have in going back to work in an environment where employees work shoulder to shoulder and often face to face within the 6 feet required for “social distancing.”

Automakers insist they are aware of the hazards and changed the protocols aimed at protecting workers, who will be wearing masks and gloves when necessary face shields.

Ford announced it has contracted health care providers in metro Detroit, Chicago, Kansas City and Louisville, KY, to “quickly” test hourly and salaried workers at plants in those areas showing symptoms of COVID-19. The testing and results should be complete in 24 hours, officials noted. Employees in close proximity to those identified will be placed in a 14-day quarantine immediately.

By design, however, assembly lines are the industrial equivalent of densely-packed urban neighborhoods, where many people touch the same parts and the same tools in the same small areas, in which the infection can quickly spread, workers have noted.

Even before FCA, General Motors and Ford closed their assembly plants in mid-March before the death toll from COVID-19 began to mount, workers were balking at working on the line because of the quick-spreading virus.

There was at least one wildcat strike at an FCA plant, committeemen at a number of Ford plants filed tough grievances over working conditions, and the chairman of a bargaining unit at a GM plant in Wyoming, MI, was let go after he inquired about the possible presence of COVID-19 in the plant.