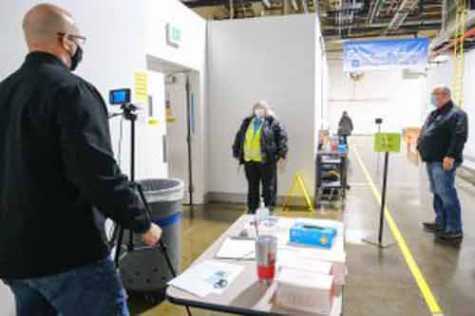 GM will use what it’s learned from building ventilators to help prevent the spread of the coronavirus once plants restart. TheDetroitBureau.com

Yet again, Detroit’s Big Three automakers are planning to push back their launch of production as the country slowly begins to emerge from the lockdown created by the coronavirus pandemic.

General Motors, Ford and Fiat Chrysler all are signaling a delay in their reopening plans to May 18. They previously expected to begin phased-in start-ups May 4.

Separately, Tesla on April 26 signaled to workers at its Fremont, CA, assembly plant that it will not have them report to work April 29, as it originally had announced.

The decision by GM, Ford and FCA to delay their production plans appears to have been influenced by several different factors, including the extension of Michigan Gov. Gretchen Whitmer’s stay-at-home order through May 15.

The automakers have also heard from workers worried about plans to keep them safe once plants do re-open. United Auto Workers President Rory Gamble raised concerns of his own about reopening plans last week.

“It is important that our employees feel confident that all precautions have been taken to ensure our facilities are safe, secure and sanitized when production resumes,” FCA said in a statement. “In light of the updated state stay-in-place orders, the company is re-evaluating its plans to resume its North American operations and will communicate new restart dates in due course.”

The auto industry has been slammed by the global pandemic, which first struck in China, forcing a quick shutdown of automotive production across much of that country.

As the coronavirus spread past China’s borders, chaos followed, first leading to the closure of European parts and assembly plants and then, by mid-March, forcing the shutdown of the North American automotive manufacturing network.

Sales, in turn, also went into freefall. Though the plunge was somewhat less than originally forecast, U.S. new vehicle demand was nonetheless off by about 45% during the first 19 days of April compared to year-ago levels, J.D. Power reported last week, relying on data from thousands of dealers across the U.S.

That has left dealers across the U.S. with bulging inventories of most unsold products and, with Power not anticipating any significant resurgence of demand until June, at the earliest, automakers have a little bit of leeway in terms of reopening operations.

As with shelter-in-place orders and other efforts to deal with the coronavirus pandemic, how the auto industry resumes production will depend on a variety of factors, including individual brand strategies as well as where their plants are located.