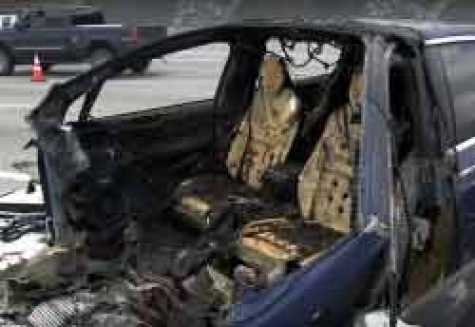 A deadly 2018 Tesla Model X crash in the area of U.S. 101 and State Route 85 in California was caused by the driver, Tesla's Autopilot system, inaction by the National Highway Traffic Safety Administration and inaction by officials in California.

The Model X crash killed 38-year-old Walter Huang, who was playing a video game on his phone when the SUV slammed head-on into a damaged crash attenuator installed to decrease crash forces.

In a report from the National Transportation Safety Board, Huang was partially blamed for the 70 mph crash for not paying attention to his surroundings, the road and the Model X.

Huang had even previously complained about his Model X steering toward the same attenuator when Autopilot was engaged, yet he still allowed it to happen while he focused on his phone.

The NTSB says Autopilot was engaged with Traffic-Aware Cruise Control set at 75 mph when the lane-keeping assist system Autosteer initiated a left steering input while the SUV was about 5.9 seconds and 560 feet from the crash attenuator.

Autopilot and other safety systems apparently took a vacation, because the forward collision warning system did not provide an alert and automatic emergency braking did not activate.

Huang also did nothing to avoid the crash, not by steering, braking or any other action.

Huang may not have taken any actions to avoid the crash, but there is still the issue of why the Model X failed to follow the correct lane in the first place.

Previous Page Next Page »
Read 824 times
More in this category: « Expect Towing to Kill Range of Electric Pickup Trucks Automating Claims for Drivers and Insurers »
back to top