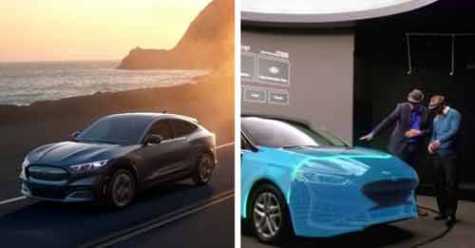 Ford are teaming up with Bosch to train their Mustang Mach-E technicians using VR.

Ford has recently released a press release highlighting its intention to use VR to train technicians on their upcoming Mach-E SUV.

By trialing Bosch's VR training system, they hope to prepare their technicians well in advance of their new EV's release later this year.

Ford is working with Bosch to develop the system

Ford has recently announced that Mach-E technicians will be trained using virtual reality.

All this without a physical vehicle anywhere in sight.

Participating technicians will use Oculus Quest VR sets. Using this setup, wearers will be presented with a simulation of major components and systems of the vehicle.

Gamification is also hinted at being part of future developments of the system too.

This will allow technicians to virtually play around with the vehicles gubbins.

"Technicians will be immersed in a simulated and gamified world, meaning they won't need to rely on actual Mustang Mach-E vehicles to learn about its components, including the electric SUV's new high-voltage system," Dave Johnson, director of Ford service engineering operations, said in the press release.

Bosch has already developed a proof of concept last year for automotive service training via VR to great success.

This was marketed to instructors, technicians, and college students, including, it appears, Ford decision-makers.

Ford has been the first major automaker to pilot the application in the real world via its service technician power-train repair course.