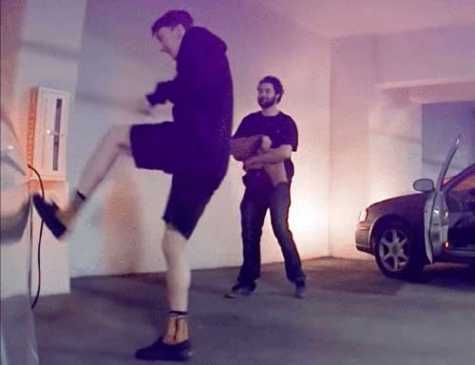 A group of vandals tried to damage a Tesla Model 3 and its charger at the Park MGM in Las Vegas.

They were scared away by the Tesla Sentry Mode and the video that the surveillance system took went viral.

Tesla’s Sentry Mode is an integrated surveillance system inside Tesla’s vehicles using the Autopilot cameras around the car.

It builds on ‘TeslaCam,’ an integrated dashcam system, and in many ways, it has been changing the game when it comes to vandalizing parked cars.

On several occasions, Sentry Mode videos have gone viral and the vandals turned themselves in after the online pressure.

In other cases, it helped police with video evidence to help them identify and find the vandals.

Now we’ve got another interesting example that happened in Las Vegas.

A Tesla Model 3 owner going by ‘Fernando C’ on YouTube reported an incident with his car that was captured by Sentry Mode:

“Our model 3 was able to alert us that someone was tampering with the vehicle at 2 a.m. in Vegas. I had Sentry Mode on and it recorded these individuals trying to break off the charging plug. I was able to report and send this to Park MGM Security. Technology is kind of cool!”

The motivation of the vandals is not clear and considering this happened in Las Vegas, they could have been just drunk but hopefully not since they left driving in their own cars.

Some commenters speculated that they did it out of spite or jealousy against someone having a Tesla.

We thank Electrek for reprint permission.

More in this category: « Dave Luehr’s Elite Body Shop Solutions to Present ‘Five Disruptions the Collision Industry Will Face in 2020 and Beyond’ Cars of the Future: Some of CES 2020's Most Stylish Concept Cars »
back to top