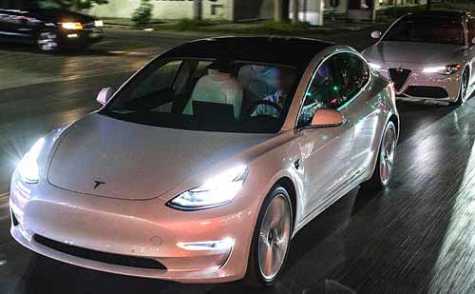 The Tesla Model 3 has been recognized by Edmunds as the Best Electric Vehicle of the Year in its 2020 #TopRated list.

Edmunds recognized the Model 3 as “unlike any other vehicle on sale, electric or ICE.” According to the publication, the all-electric sedan’s features, technology, price and driving dynamics make it an “impossible force to ignore” in the auto industry. Edmunds also stated the Model 3 was more fun to drive than other premium sedans at the same price point like the BMW 3-Series.

“For around $40,000, no other EV even comes close to matching the all-round appeal of the Model 3,” the publication wrote.

In 2017, Edmunds stated that the Model 3 had too many issues that made it tough to recommend to buyers. In Dan Edmunds’ initial Model 3 review, he noted the service and build quality of the vehicle were not up to par compared to the competition. “Body panel gaps are inconsistent, reflecting a lack of attention to detail, and this applies not only to our own car but even to Model 3s we’ve seen on display,” he said.

Tesla has since improved on these aspects. These improvements in production were highlighted in a recent Bloomberg poll, where 5,000 Model 3 owners were asked to give feedback on their opinions of the car. Many of those polled were impressed with Tesla’s improved build quality. Even auto industry veteran Bob Lutz, a known Tesla critic, has admitted that the Model 3’s build quality is now “world-class.”

Edmunds’ initial review of the Model 3 also listed complaints about Tesla’s service, another aspect of the company that continues to improve. The expansion of Tesla’s mobile service units that drive to customers’ location to address maintenance and basic repairs has been well-received. In a separate edition of the Bloomberg poll of Model 3 owners, many reported improvements in the availability of appointments and increased speed of service as well.

The Model 3’s range has always been appealing to the publication, even in its initial 2017 review.