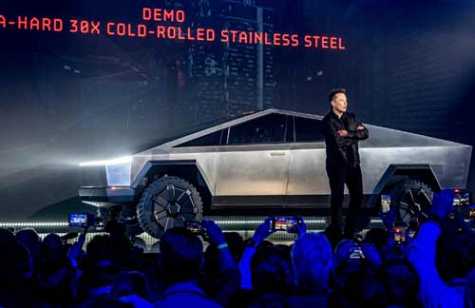 Tesla CEO Elon Musk has hinted that the Cybertruck might have more compact dimensions when it rolls out in 2021.

The idea came after a Tesla owner-enthusiast’s video showed that the Cybertruck may not fit in a normal, residential-sized garage. Based on the Tesla CEO’s recent tweets, it appears that Tesla may be able to shave off a few inches off the Cybertruck’s rather bulky body without compromising anything in terms of utility and looks.

Musk’s comments came after Model 3 owner Tesla Raj posted a video featuring an augmented reality app estimating how the Cybertruck would look like in a target area. When Raj used the app to see if it would fit in his garage, he found the 231.8 inch-long Cybertruck was just a bit too long for the space in his home.

Musk responded to these findings, stating that the Cybertruck could receive a design revision that would make the car a bit easier to fit in a traditional American garage. “We can prob reduce width by an inch & maybe reduce length by 6+ inches without losing on utility or aesthetics. Min height is below 75 inches when air suspension set to low. Will post exact number soon,” Musk said.

Based on Musk’s tweet, the more compact Cybertruck would have a width of 78.8 inches instead of the original 79.8 inches, and its length will be reduced to 225.7 inches from 231.7 inches. This should make the Cybertruck easier to fit even in 20×20 garages. Parking the vehicle and maneuvering the massive all-electric machine would likely be easier as well. What’s more remarkable is the Tesla CEO explained that these reductions won’t cause any compromises with the vehicle’s stellar utility and iconic aesthetics. Musk has also promised no loss in cargo capacity or interior space with the vehicle’s more compact size.

After providing some updates on the Cybertruck’s dimensions, Musk also received a question about the approximate size of the “smaller” Cybertruck that he has hinted at in the past.