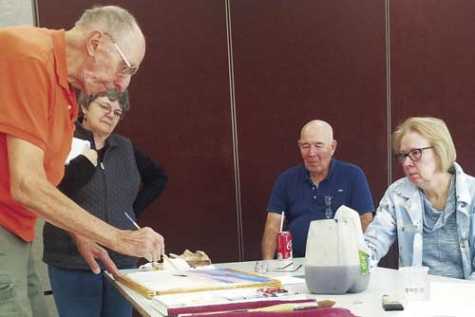 The Colonial Club website states his classes are in “high demand” – but artist Richard Schierloh (left) will only teach six students at a time to work on watercolor paintings and drawings. Louise Joyce, Sun Prairie Star

He’ll offer iced tea on a warm fall afternoon and discuss his art in depth, including a 40-year career as a car designer at the Ford Motor Company.

Afterwards, since biking season is done, he’s off to complete a three-mile walk around his Smith’s Crossing neighborhood.

Schierloh currently teaches painting at the Colonial Club and moved to Sun Prairie in 2010. The Colonial Club website states his classes are in “high demand” – but he will only teach six students at a time to work on watercolor paintings and drawing. Schierloh only teaches from November to May so he can enjoy his summers biking on nearby trails.

Locally, Schierloh has painted and raffled an art piece for the Colonial Club Strawberry Fest for many years. He likes to paint local landmarks, like the Crosse House on Main Street, and include a time-appropriate automobile nearby.

Schierloh is collaborating on a two-year book project on the history of Lincoln automobiles, completing new illustrations of cars from the 1930s up until the 1960s.

All this requires plenty of research to retain authenticity. Schierloh notes there are cars that he designed in the book. For the rest, he must jump into the designer’s mind.

Schierloh said he can’t remember a time when he didn’t draw. Art to him means helping others discover the world and bringing out the possibilities of people. His childhood drawing board, kept as a keepsake, has car drawings on it.

Schierloh said certain people are talented artists, but the talent needs to be coaxed out, as is the case in his Colonial Club class.

“If you are capable of doing this, it’s in your genes,” he said. “However, anyone can learn. My students are all surprised at what they have accomplished in class.”

View the embedded image gallery online at:
https://www.autobodynews.com/index.php/industry-news/item/18966-lifetime-artist-schierloh-teaches-others-in-retirement.html#sigProId119bf3c95a
More in this category: « Industry Veteran Shares Insight About Future of Collision Repair Industry Should Tesla Carry the Burden of Teaching the Public About Artificial Intelligence? »
back to top