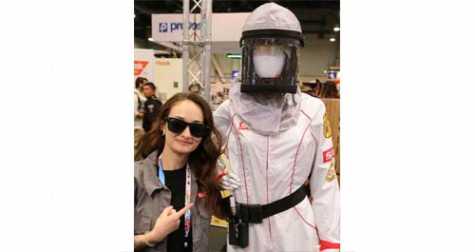 Fear not, ladies—the Girls Behind the Gun paint suit is made just for you and is finally here!

If you’re a female refinisher or technician, this is great news and much needed, according to its creator Connie Manjavinos.

Several years ago, Manjavinos, a head painter at Kiddy’s Classics in Jensen Beach, FL, and the person behind Girls Behind the Gun began approaching SATA about producing a paint suit designed specifically for women. As more and more ladies move to the forefront of this industry and gain respect for being top-performing technicians, Manjavinos is driven to play a meaningful role.

With a mission of connecting to other females in the collision industry, Manjavinos created an outlet on social media: Girls Behind the Gun. It’s a place of appreciation for all women in the refinishing and collision repair industry. Manjavinos is now connected with thousands of other female refinishers and technicians. The movement started four years ago and has already reached an impressive 20,000 followers on Facebook and Instagram.

Hilary Ann (@autobodybarbie) came to me with an idea to start “an exclusive Facebook page called Auto Body Gals and I responded with go for it! We have almost 1,100 women from all over the world who use it and share tips, tricks, and techniques while ultimately networking and celebrating each other. It's going to take an army to make a difference for women in this industry."

Manjavinos has received national acclaim for her work and has participated in many events including 3M’S PPS World Cup. She also received second place in last year’s SATA Gun Design Competition for SEMA, and also participated in two all-female builds featured at SEMA.

It’s still a male-dominated industry, but things are getting better, Manjavinos said. “Yes, there are still a few guys out there who have issues with women, but they aren’t going to stop me from what I am doing. In a way, it’s inspiring and most of the men I encounter are so supportive, to be honest. That’s why networking with other female painters and techs is so needed, because there’s power in numbers.”

When Tony Larimer at Dan-Am Company and CHOKO Designs, a clothing manufacturer, gave her paint suit concept two thumbs up, it was go time, Manjavinos said. "In November 2018, the people at Choko approached me and after a while all three parties came together to do this. It was fate and pretty amazing. I was excited and we began the design process right away. We started with a rough draft and then it changed and evolved during the development stage."