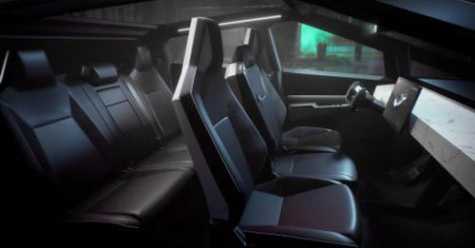 Tesla has revealed its highly-anticipated pickup truck to the public, and it is every bit the monster that CEO Elon Musk has made it out to be.

With its aggressive stance, high ground clearance, and massive frame, the Tesla’s Cybertruck is quite a sight to behold.

The Tesla Cybertruck does not look like a traditional pickup. True to Musk’s words, the vehicle does look like a futuristic armored personnel carrier that stepped out of the set of Blade Runner. Its straight sloping roof give the pickup a streamlined yet unique look. As the Tesla CEO has stated in the past, the Cybertruck won’t look like any other pickup on the road today.

That being said, there are several key design aspects that are notable about the Cybertruck. These include its extremely angular body, its large bed, and its high ground clearance. The Cybertruck also has a thick stainless-steel body, which Tesla demonstrated by having a sledgehammer hit the pickup’s door panel. The vehicle is also fitted with Tesla’s Armor Glass, which unfortunately cracked after a large steel ball was thrown at it onstage. The metal ball didn’t go through the glass though, which is a plus.

Tesla has pretty much mastered the art of keeping the specs of its upcoming vehicles’ secret. As it turns out, the Cybertruck’s performance figures are worth the secrecy, as they are flat-out insane. The vehicle is equipped with a standard single motor and can be upgraded to dual and tri-motors. Just as Musk said, the Cybertruck, despite its size, is quite nimble, thanks to its instant torque and four-wheel steering. These ultimately allow the Cybertruck to hit 60 mph in just 2.9 seconds, with handling comparable to a Porsche.

Here are other notable specs of the Tesla Cybertruck: