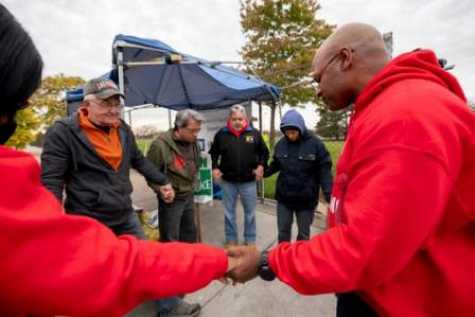 UAW Local 22 workers hold a group prayer in front of the General Motors Detroit-Hamtramck Assembly plant in Detroit as the six-week strike came to an end. David Guralnick, The Detroit News

The longest nationwide strike against General Motors Co. (GM) in nearly 50 years ended on Friday, Oct. 25, when a majority of members ratified a new four-year deal with General Motors Co. and the union turned its attention to Ford Motor Co.

The week-long vote ends a 40-day strike that cost members thousands of dollars each, GM as much as $2 billion in lost profits and the automaker's shareholders more than 5% in the value of their stock.

Members ratified the contract 57% to 43%, pushed by large totals at the automaker's "Big Three" truck and SUV plants in Flint, MI, Fort Wayne, IN, and Arlington, Texas.

“General Motors members have spoken,” said UAW Vice President Terry Dittes, director of the UAW-GM Department. “We are all so incredibly proud of UAW-GM members who captured the hearts and minds of a nation.”

The ratification comes amid a years-long federal investigation into union corruption that has charged 11 individuals and convicted ten, including a retired UAW vice president. The continuing probe also has implicated President Gary Jones and his predecessor, Dennis Williams, and included coordinated government raids on their respective homes. Neither has been charged.

Workers walked out over demands for better wages, a shorter path for part-time workers to become full-time employees and retaining private health-care coverage considered some of the best in the country. The union largely succeeded, winning wage increases and lump-sum bonuses, eliminating the $12,000 cap on hourly profit-sharing payouts and essentially killing the "two-tier" wage structure adopted in 2007 over fierce internal resistance.

"They both won some and they both lost some," said Kristin Dziczek, vice president of industry, labor and economics at Ann Arbor's Center for Automotive Research. "Negotiations are supposed to cut things straight down the middle."