Written by Eric Loveday, Inside EVs 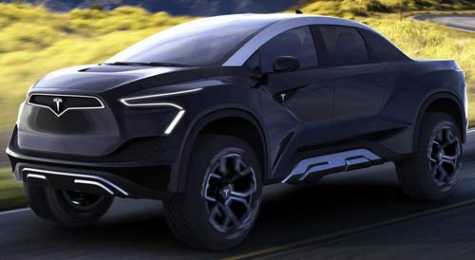 Tesla CEO Elon Musk seemed pumped up for the reveal of the Tesla pickup truck.

He referred to it as the Cyber Truck, which means Tesla could become CyberS3XY.

Recently, Tesla released a bit of new info on the Tesla truck in its Q3 earnings report. Well, maybe it's not info, but rather lack thereof.

Tesla has yet to determine a production site for the pickup truck, which could be taken to mean several different things. Perhaps the truck is still a bit far off and a site won't be picked for a while. Or maybe, a whole new site will be needed to produce the truck in high volume. We'd place our bets on the latter.

If priced below $50,000, as Musk suggested in the past, sales would surely be through the roof, so Tesla would indeed need a new factory to produce the truck in a massive volume.

The Tesla truck will make the Ram seem toy-like and will beat the Ford F-150 too. Lofty goals, but Tesla really never fails to deliver on the performance front.

In top-level trim, the Tesla truck should boast a range of between 400 and 500 miles, possibly more. As one might suspect, it will be all-wheel drive with a motor for each axle. Musk also noted that the suspension will dynamically adjust according to its load. Being electric and a truck means it will have gobs of torque. Musk once tweeted that it could tow 300,000 pounds.

Some additional features include 240-volt power for all of your work tools, a unique drop-down tailgate and it will parallel park automatically & have 360-degree cameras & sonar.

There's even some speculation that the Tesla truck will be the first Tesla equipped with the million-mile battery that's being developed by Tesla researcher Jeff Dahn and Jessie Harlow.

It seems this could be the vehicle that takes Tesla to a whole new level.

We thank Inside EVs for reprint permission.