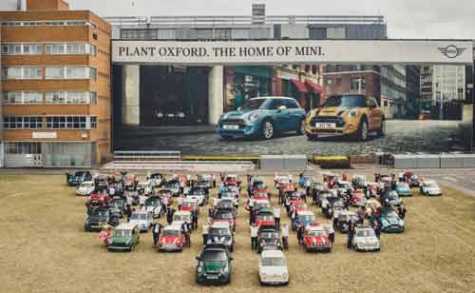 60 years of Mini, one from each model year. Mini

To celebrate both the production of its 10-millionth car and its 60th anniversary, Mini gathered a group of 60 cars — one from every production year — for a recent photo op at its assembly plant in Oxford, England.

By the way, that 10-millionth Mini was a 60-Years Anniversary Edition model.

“To celebrate the brand’s 60th anniversary, Mini has been on the hunt for 60 owners of 60 cars, one from each year of production — with 60 personal stories from across the decades,” the company said.

“Shared across the Mini digital channels throughout the year, the stories from owners around the UK show the love they have for their cars and the important part they have played in so many people’s lives.”

Among the cars taking part was the first one produced, Mini noted.

The brand was acquired and reborn in 2001 by BMW, with production continuing in England. Last year, nearly 400,000 Minis were purchased by customers in 110 nations. 80 percent of Mini production is for export. (Mini convertibles and Countryman models are assembled in the Netherlands, and all Minis carry engines produced at Hams Hall near Birmingham, England).

“To see the 10-millionth Mini roll off the production line here at Oxford was a moment of great pride for the whole team, a number of whom have relatives who were here building the very first Minis in 1959,” commented Peter Weber, managing director of the Oxford (final assembly) and Swindon (stamping and sub-assembly) plants.

“This is a wonderful chapter in the Mini story and proof of the passion that our customers have for this very special British car.”

View the embedded image gallery online at:
https://www.autobodynews.com/index.php/industry-news/item/18337-mini-celebrates-60-years-and-10-millionth-vehicle.html#sigProIdecd21f05ff
More in this category: « Dealership Power Outage Results in Shutdown of Communication System Why Is Ethics Important for Self-Driving Cars »
back to top