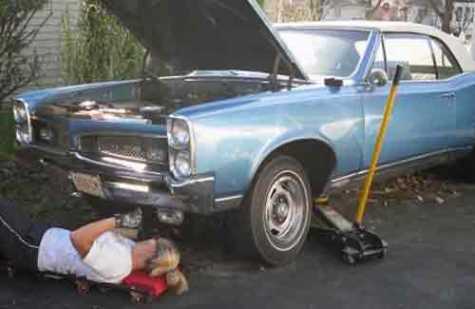 When it comes to explaining the rewards of becoming an auto service or other transportation industry technician to the parents of children in middle- and high-school, Tina Smith and TechForce Foundation have this message:

“There are different roads to success, and even though your child doesn’t want to go to a four-year college, it doesn’t mean they’re not ‘good enough’ because they choose to go into a technical career,” said Smith, who ought to know.

Her journey to becoming director of national partnerships at TechForce Foundation started when she was “kinda kicked out” out of a traditional high school and landed in a vocational high school.

TechForce Foundation is a non-profit 501 (c)(3) organization. Its mission is to reposition the image of the transportation industry technician from “grease monkey” to skilled professional and highlight their earning potential.

A self-described “car nut,” Smith loves hot rods and muscle cars. Her first car was a silver and green 1968 Chevy Chevelle Malibu, equipped with a Cherry Bomb exhaust. The car’s two-speed, Powerglide transmission contributed to the exhaust “rumble” when shifted into low gear, she said.

As a child, Smith regularly took things apart — the family toaster, her bicycle, a radio — and put them back together and enjoyed helping her father work on the family boat.

“I’d hand him tools, and I liked sticking my fingers in the grease bucket,” she said.

But school was a different story.

The traditional classroom setting that required her to “sit up straight, pay attention, be quiet, didn’t fly for me,” she recalled. “I couldn’t sit still; I was disruptive.”

So at age 15, “for lack of a better term, I kinda got kicked out of that high school,” she said, with a chuckle. “The high school counselor suggested I go to vocational school.”

But when she got into the auto mechanics program, “it was a natural fit,” she said.

She excelled and after graduating, continued her education at Sinclair Community College.