Ford, Volkswagen in Partnership Towards Autonomous and Electric Vehicles 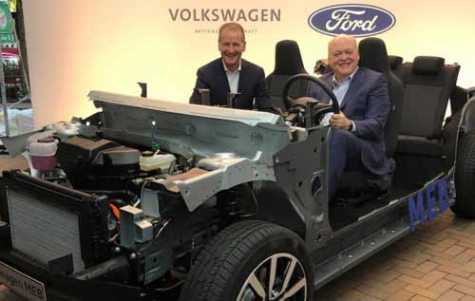 A joint venture between Ford and Volkswagen (VW) was announced on Friday, July 12.

The two well-known automotive companies will be collaborating on their autonomous and electric vehicles and technologies considered critical for the future of the industry.

Billions of dollars’ worth in investments will call for intellectual property and hardware, among the sections of the two auto companies, to be shared moving forward.

What technologies will the companies be exchanging?

The joint venture aims to cut down developing and manufacturing costs.

Herbert Diess, VW's chief executive, said: "Our global alliance is beginning to demonstrate even greater promise and we are continuing to look at other areas on which we might collaborate."

Ford is looking to build over 600,000 electric vehicles by using VW's parts, which will eventually bring manufacturing costs down for both companies.

According to Citi analysts, the collaboration is "transformational" for both companies.

Even though the companies will be working closely together and crossing manufacturing paths regularly moving forward, the alliance will not require cross-ownership.

By working closely together, and sharing a pool of knowledge and industry innovation, the auto companies will leverage a clear advantage in the field.

As Diess said, "In such a competitive environment, it just makes sense to share investments, pool innovation capabilities and create scale effects that are clearly defined."

If we already take a look at what the automakers combined built in 2018 alone, they produced 18 million vehicles, approximately 20 percent of the global new-vehicle market.

Imagine what they will create moving forward by working together.

View the embedded image gallery online at:
https://www.autobodynews.com/index.php/industry-news/item/18053-ford-volkswagen-in-partnership-towards-autonomous-and-electric-vehicles.html#sigProId1fb40fa43a
More in this category: « UAF Announces Record-Setting Amount of Scholarships Awarded Driverless Tesla Semi: Did They or Didn't They? »
back to top