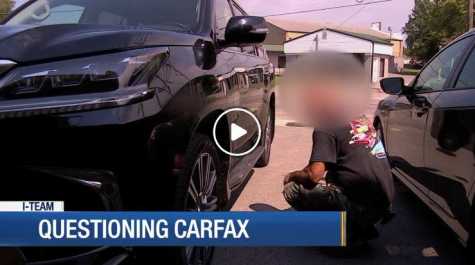 The average used car costs nearly $20,000, according to Edmunds.com. If you’re a buyer, you want to make sure you’re getting your money’s worth.

The News 4 I-Team found that vehicle history reports like CARFAX won’t always tell you what you want to know---for example, whether the car has ever been in an accident.

News 4 recorded everything on an iPhone camera.

The salesman said the vehicle’s CARFAX report showed it had a clean title and had never been in a wreck.

"It's got a clean CARFAX. No accidents," the salesman said.

News 4 asked if they could take the Lexus to a shop to have it checked out.

"If you want to take it for an inspection, you can," the salesman said.

When they brought the Lexus to a local body shop, the shop owner immediately spotted indications that several sections of the SUV had been painted, like the back lift gate, for example.

"And the front bumper’s been done, too," the body shop owner said.

News 4 agreed not to use his name; he’s been in business for 35 years.

"This side's been done, too," he said, showing that the paint resembled an orange peel's bumpy texture, rather than a banana skin's smooth texture.

So how did the Lexus have a clean CARFAX report? That's where you have to be careful.

Companies like CARFAX get their information from police reports, insurance companies, repair shops and other sources.

But not every wreck is reported to police or to an insurance company.

"Minor fender benders and such, people just fix themselves instead of turning them into their insurance," the body shop owner told News 4. "They pay for it out of pocket, not turning it into insurance. So nobody knows."

News 4 went to the car dealership and pointed out the painted areas to the salesman. He didn’t know they were recording with their iPhone.

"Half these cars are painted," the salesman said.

News 4 then told the salesman that they were the News 4 I-Team. They were greeted by Hans Nikenjad, who introduced himself as the dealership’s owner. Nikenjad said the Lexus was a lease return that they had bought at an auction.

News 4 showed him what the body shop owner had pointed out.

Nikenjad told Amons that buyers are welcome to have a car checked out because there could be some history the dealer doesn't know about either.

In fact, CARFAX warns consumers on its own website that CARFAX may not know about every accident.

“CARFAX receives accident information from thousands of sources, but not every accident or damage event is reported and not all reported are provided to CARFAX. CARFAX always recommends the CARFAX Report is used along with a pre-purchase vehicle inspection and thorough test drive to check for prior repairs, hidden damage and anything that might not have been reported to CARFAX.”

Justin Holder, the buyer who went car shopping with the News 4 producer, didn’t buy the Lexus and wants to warn other buyers to bring any car they're considering buying to a mechanic or a body shop.

"Lesson learned. Just check anything before you buy," Holder said.

You may still want to buy a car that’s had body work, the body shop's owner said, but having the information could help you negotiate a few thousand dollars off the price.

“CARFAX has more than 112,000 domestic and international sources reporting information to us, including state DMVs, insurance companies, police departments, service and repair shops, auto auctions and more. We work tirelessly to add new sources and more information that helps people buy and sell used cars. While thousands of accidents occur every day that go unreported to anyone, we’re happy to add any information someone has about an accident to the CARFAX Report. Getting a CARFAX Report is one important step in the used car buying process, along with a thorough test drive and inspection by a certified, trusted mechanic.”