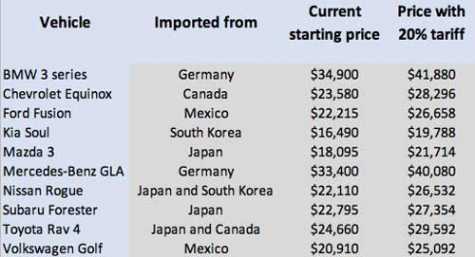 President Trump thinks a new tax on imported cars will boost American auto production and bring back thousands of jobs.

He’s about the only one. As the Trump administration readies a report on imported cars that could be the pretext for new tariffs, economists and industry officials warn of soaring costs for car buyers, a drop in overall sales and a net loss of jobs. Trump said recently that if trading partners don’t agree to his demands, “I’m going to tax their cars coming into America, and that’s the big one.” Big blunder might be more likely.

Trump’s idea is to impose a 20 percent tariff on imported cars to encourage more domestic auto production. Imports would become more expensive, so consumers, in theory, would buy more domestic models, and more automakers would build cars in America to escape the tariffs.

In reality, the most certain outcome is that prices would shoot up as soon as the tariffs went into effect. Americans buy about 8 million imported cars each year, and a 20 percent tariff would add $5,000 to the cost of a $25,000 car. Manufacturers might not pass all of that onto consumers, but the cost of an import would still rise by more than $4,000, on average, according to the National Taxpayers Union.

Many popular models would suddenly be more expensive. Here are a few examples, with the current starting price followed by the higher price including the entire 20 percent tariff:

Cars made in America would suddenly have a big price advantage. But those prices would probably rise as well because the competition would now be more expensive. The National Taxpayers Union estimates the price of an American-made car would swell by $1,262. With prices higher across the board, Americans would buy fewer cars.

This is a very simple analysis based solely on where a car is assembled. But Trump could go further and tax cars based on the amount of American-made content in the vehicle. This more complicated formula would impose some degree of tariff on virtually every vehicle sold in America, because just about every car includes some foreign components.