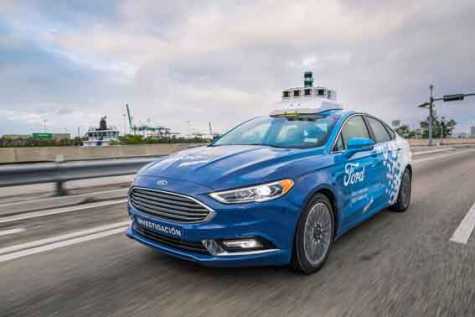 The University of Cincinnati is currently conducting extensive research on the development of connected autonomous technology for vehicles.

Connected automation refers to a system in which an autonomous vehicle will share data with not only the other vehicles on the road, but also with a given environment’s infrastructure and population.

“As the controllability of the system increases, we can be pushed more into an ideal state,” said Jiaqi Ma, an assistant professor at UC with a doctorate in transportation engineering from the University of Virginia. “If designed well, the connected system will allow us to control and reduce the [greenhouse gas] emissions produced by all the vehicles on the road.”

Before Ma was hired at UC, he worked as a research scientist for the U.S. Department of Transportation’s Leidos/Turner-Fairbank Highway Research Center.

Ma now serves as the lead of the UC College of Engineering and Applied Science’s intelligent systems lab.

While working for the USDT and UC, Ma has developed an algorithm that connects driverless cars to traffic lights to coordinate how vehicles respond to changing traffic signals without human interaction.

Ma argues that such a system would not only increase the number of vehicles able to advance past a green light before it turns red, but that it would also improve overall traffic safety.

“We’ve found that by smoothing stop-and-start traffic, fuel efficiency can be improved by up to 20 percent,” Ma said, citing the increased fuel efficiency the system will provide.

“It would be interesting to see in practice,” said Austin Porter, a 22-year-old mathematics student. “[It] would definitely send the autonomous world to a new level.”

“I am worried that it would cause issues if there are even minute errors in the system,” Porter said. “Improved safety systems would have to be developed in the event a flaw is exposed.”

Increased safety is an oft-used argument for the advancement of driverless technology. The National Highway Traffic Safety Administration’s website claims 94 percent of “serious crashes” are caused by human error.

“Humans are much less tolerant of autonomous errors [than human errors],” Ma said. “So, it’s a priority to make sure the system is flawless before being tested on the road.”

Previous Page Next Page »
Read 912 times
More in this category: « Will the Facebook Hack Affect the Automotive Industry? CARSTAR Joins NABC to Highlight Distracted Driving Awareness Month »
back to top