Tesla on 'Auto-Pilot' Crashes Into Fire Truck in CA 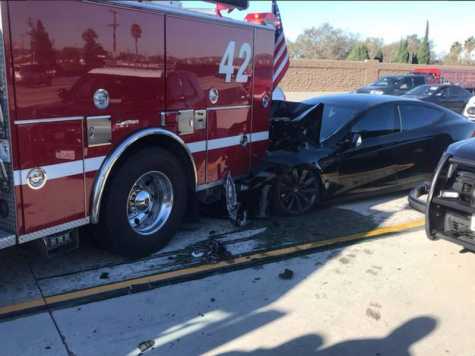 Culver City Fire Department's Engine 42 was struck by a Tesla sedan while working a freeway incident Jan. 23, according to CCFD.

The Tesla was traveling at 65 miles per hour---the driver reportedly told firefighters that the vehicle was on auto-pilot. This is the second accident involving a Tesla on auto-pilot in the last two weeks, according to ABC7.

Tesla's auto pilot feature is an advanced driver assistance system that uses cameras, sensors and various vehicle systems to maintain the speed of the car, prevent them from running into slower-moving cars ahead, keep the vehicle in the lane and even change lanes for the driver, according to Auto Trader. Very few other cars have all of these systems, and Tesla gives control of all of them to the car's electronic capabilities, requiring much less input from the driver, according to Auto Trader.

The National Transportation Safety Board will be coming to California to examine the crash, according to ABC7. No one was injured. The first Tesla auto-pilot crash occurred Jan. 13 on the Bay Bridge. The suspected drunk driver had passed out behind the wheel, ABC7 reported.

CCFD warns drivers to stay alert while behind the wheel.