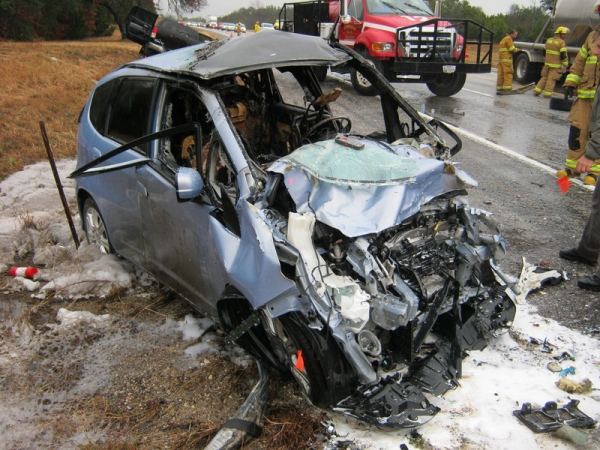 On Oct. 2, a Texas jury found that John Eagle Collision Center’s improper repair was liable for the severity of the crash of a 2010 Honda Fit, awarding the injured couple $42 million in damages, but assigning 25 percent blame to the driver of the other vehicle, a 2010 Toyota Tundra, leaving the shop responsible for 75 percent of the couple’s injuries, and owing approximately $31.5 million under the verdict.

Attorney Todd Tracy, who represented plaintiffs Matthew and Marcia Seebachan, was pleased with the award and not at all surprised with the result.

“I think it was vindication for the Seebachans in many ways,” Tracy said. “Once the jury weighed all of the evidence and went through the testimony, they could clearly see that most of the liability rested with the body shop. One of the more influential members of the jury said that John Eagle Collision Center made a business decision when they glued the roof instead of welding it on the Honda Fit. She concluded that since it was a bad decision, the shop had to pay for it and the award indicates that thinking.”

Tracy said that he is now going after State Farm, the insurance company that covered the Seebachans at the time of the accident, in a new civil suit. He strongly believes that based on this case, he will be able to prove that the shoddy repair was directed by the insurer.

“The message is that you had better do the repairs at OE standards, because if you don't you might get sued big-time,” Tracy said. “The OE procedures from I-CAR are the industry's Bible, so this is what happens when you don't follow the Bible. I want the insurance companies out of the collision repair industry now, and the decision in this case is a definite step in that direction.”

Tracy and the Seebachans have refiled a lawsuit against State Farm for its alleged role in influencing the roof repair, which used an adhesive instead of being welded. According to John Eagle’s body shop director Boyce Willis, State Farm wouldn’t pay the shop unless the repair was done according to its specifications as opposed to Honda’s.

Boyce Willis said in a deposition that the facility in 2012 bonded a replacement roof to a 2010 Honda Fit in clear contradiction to the OEM repair procedures. (Willis insisted he knew using the 3M 8115 panel bonding adhesive was a better repair, as did the defense during the trial.)

Ford GT engineer and plaintiff consultant Neil Hannemann wrote that in his expert opinion, the failure of the roof of the Seebachans’ 2010 Honda Fit during a crash compromised the overall structure and collision energy management of the vehicle—contributing to the Seebachans being trapped inside and a subsequent fire.

“According to John Eagle’s corporate representative, in sworn testimony taken on July 7, 2017, State Farm dictated to John Eagle how the car was to be repaired, i.e., to use adhesive rather than spot welding,” the lawsuit read. “Furthermore, according to John Eagle’s corporate representative, State Farm can ‘trump’ the OEM (Honda) specifications because the repair facility needs to get paid. However, profits should never trump safety.”

The Seebachans filed suit against State Farm in August but dropped the suit a few days later as not to interfere with the timeline of their case against John Eagle.

“No insurance company should ever dictate to a collision repair center or body shop how to repair a vehicle. To do so is extremely negligent, and shows a wanton disregard for human life and the safety of others,” Tracy argued. “John Eagle did not repair the subject 2010 Honda Fit to Honda’s body repair specifications due to State Farm’s instructions, threats, and/or coercion.”

The couple is suing the insurer for negligence and breach of warranty.

“The Anatomy of a Lawsuit: The Crucial Details of the $42 Million Verdict” on Wednesday, Nov. 1, will feature Tracy Law Firm attorney Todd Tracy at SEMA. According to SCRS, Tracy’s presentation of the case can:

• Help collision repair businesses avoid their own “$42 million dollar verdict.”
• Help clarify the facts that led a jury to conclude that OEM procedures were paramount.
• Define how business decisions made in the course of repair can have dramatic effect on both the repair outcome and ultimate responsibility.

“Anatomy of a Lawsuit” will be held from 10:30 a.m. to noon Nov. 1 in Ballrooms D-E of the Westgate Las Vegas, located right next to main SEMA venue Las Vegas Convention Center.

SCRS will host a panel during the OEM Collision Repair Technology Summit that specifically addresses repairer liability concerns and realities.

"The Hidden Dangers of Vehicle Technology, Improper Repair Methodology and Your Liabilities" will be moderated by technologist and author, John Ellis, and will feature Tracy, and Attorney Erica Eversman (Vehicle Information Services), Mark Allen (Audi of America) and Aaron Clark (former shop owner.)

This panel will take place on Thursday, Nov. 2 from 3-5 p.m. and it will address:

• An industry that is grappling with following manufacturer repair procedure requirements that are expected to be performed on every occasion.

• The implication of business decisions that can directly impact repair facility liability.

Registration for all Repairer Driven Education sessions during the SEMA Show can be secured at www.scrs.com/rde, or onsite outside the education classrooms.