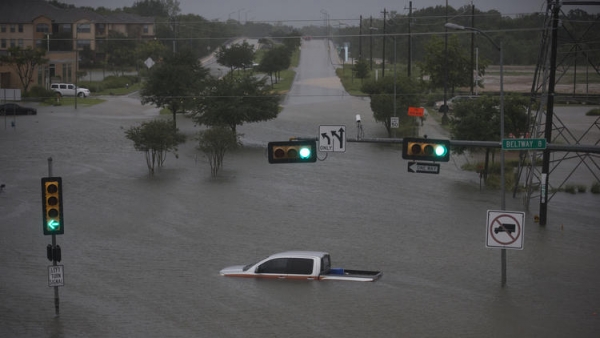 Now his white Toyota Corolla sits with a broken axle in the parking lot of a Strips convenience store in Rockport, TX. It is, he admits, probably the end of the road for his trusty car with almost 190,000 miles on it.

“The hurricane was right on my tail,” Smith said. “It caught me. It lifted the back of the car up and I was looking down at the road through my windshield. Then — bam — it slammed back down and that was it.”

Smith, 56, hasn’t filed a claim with his insurance carrier yet; he’s been busy helping his parents clean out their wind-damaged house along the coast. He said he doubts he’ll get much anyway and is instead hoping for some assistance from the Federal Emergency Management Agency.

Still, Texans already have filed more than 100,000 storm-related claims on their car- and truck-insurance policies, said Mark Hanna, a spokesman for the Insurance Council of Texas trade group, and some analysts estimate that figure will climb as high as 500,000.

With hurricane season in full swing and the tally from Irma just beginning, Harvey has been projected to be one of the costliest disasters in U.S. history, with experts estimating damage could exceed $100 billion. Texas Gov. Greg Abbott has even suggested that damage could reach $150 billion to $180 billion.

About 15 percent of Texas motorists don’t have vehicle insurance, even though liability insurance is mandatory in the state.

Of the remaining 85 percent of motorists, three-quarters of them carry comprehensive coverage, which would include protection against flooding, on their policies, Hanna said.

“That’s very good news,” he said, for getting Texans back on the road.

There are just slightly fewer than 14 million total passenger vehicles and 6 million trucks in Texas, according to the Texas Department of Motor Vehicles.

Of that total, 3.5 million vehicles were registered last year in Harris County, which includes Houston, according to the DMV.

“We’ll see people wanting to replace their cars in a pretty quick fashion” because Houston, much like Los Angeles, is a sprawling city heavily dependent on the car for transportation, said Jessica Caldwell, director of industry analysis at Edmunds.com.

“You will see auto sales higher in the affected areas, probably for the rest of the year, with people needing to replace their vehicles,” she said. “It’s hard to go without a car in a place like Houston.”

Edmunds estimated that 366,000 new vehicles on dealer lots in Texas were damaged by Harvey, including 150,000 to 200,000 new vehicles in the hardest-hit areas such as Houston and Corpus Christi.

Many of those new vehicles are trucks; Texas is the top market for new-truck sales in the United States.

One dealership, McRee Ford in Dickinson, southeast of Houston, had temporarily closed because all of its 500 new and used vehicles were damaged by the storm.

But the Houston Automobile Dealers Assn., which represents about 175 franchise dealers selling new cars and trucks, said 85 percent of its dealers in Houston were fully operational with zero or minimal damage.

“All but a handful of dealers I spoke to this morning are all open today at full service and regular hours,” association spokeswoman RoShelle Salinas said Aug. 31, only the second day of sunshine for Houston after Harvey’s deluge. “This is a great position to be in to help Houstonians get back into transportation and on to moving about the city.”

She said some dealers “have multi-story parking garages, and a lot of them put their vehicles into those garages” before the storm hit “so they wouldn’t suffer damage if the water was to rise.”

For those dealers who lost cars, replenishing their lots with new vehicles “is not an issue” because “there’s an overabundance of new cars” in the U.S. market, Michelle Krebs, executive analyst for Autotrader, said in an email.

“All of this inventory can be shuttled around the country,” Krebs said. “In fact, AutoNation, which has numerous dealerships in the Houston area that were hit by Harvey, said it would do exactly that.”

But it could be a tougher situation for Texans who can afford only a modestly priced used car that’s a few years old, Krebs said.

“Shortages exist in the very affordable [market for] 4- to 8-year-old cars,” she said. “That could spell trouble for consumers with few resources or with resources stretched.”

It’s also unclear how rapidly flood-weary Texans will jump into the market for another car.

“The hard thing to figure out is the insurance claims, and how fast that process will work,” Caldwell said. “Most people can’t buy a new car while waiting for an insurance check for the old one.”