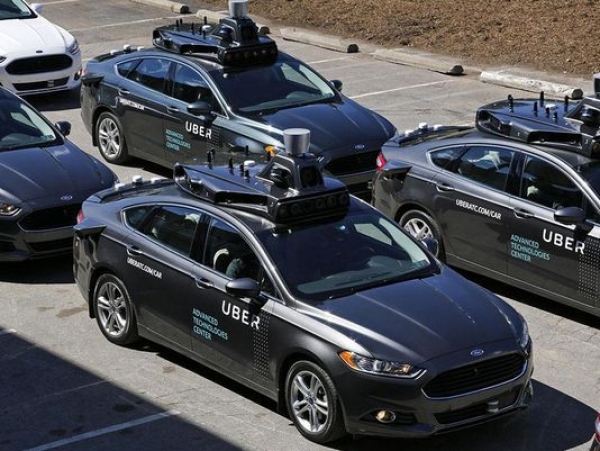 The measure, approved on a voice vote, would allow the Secretary of Transportation to grant exemptions to federal motor vehicle rules that require cars to have human operators. Gene J. Puskar / AP

Automakers would each be allowed to operate up to 100,000 self-driving cars per year on U.S. roads, and states would be prevented from passing laws to prevent them from doing so under a bill that was approved Sept. 6 by the U.S. House of Representatives.

The measure, approved on a voice vote, would allow the Secretary of Transportation to grant exemptions to federal motor vehicle rules that require cars to have human operators. Initially, 25,000 cars per automaker could be operated if companies can prove they meet existing safety standards for traditional cars. After a 12-month period, the number of exemptions per manufacturer would increase to 50,000, and it would go up to 100,000 in the third and fourth years.

The measure, which goes now to the U.S. Senate, was approved after weeks of backroom negotiations between Republicans and Democrats on the panel over issues involving the number of test vehicles that would be exempt from federal safety standards requiring a human to be in control of the car and the length of time for which those exemptions would be valid.

Lawmakers on both sides of the aisle said the compromised legislation will boost safety of U.S. roads, and also represented a rare bipartisan consensus in a typically bitterly divided Washington.

“This legislation on autonomous vehicles ...will go a long way to taking the human error out of driving and making roads safer for all Americans,” said U.S. Rep. Fred Upton, R-St. Joseph. “Forget about the Jetsons, it’s over. The future of the autonomous industry is here, and this bill will give the automotive industry the tools to revolutionize how we’re going to get around for generations to come.”

U.S. Rep. Debbie Dingell, D-Dearborn, added, “This wasn’t something that was thrown together at the last minute. A lot of time has been spent addressing everybody’s concerns.”

The bill passed Sept. 6 requires the U.S. Secretary of Transportation to issue a rule requiring automakers to submit a safety assessment certification for their self-driving cars within two years of passage of the measure.

In the interim, the legislation directs carmakers to submit letters to the National Highway Traffic Safety Administration that mirror a set of 15 guidelines that were recommended by the Obama administration in 2016. The guidelines called for automakers and technology companies to voluntarily report on testing and safety to federal regulators before autonomous cars are sold to the public. Under Obama’s proposal, automakers would have been required to report how they were tested, how the systems work and what happens if those systems fail before self-driving cars are allowed to roll on U.S. roads.

Democrats in the House had sought to greatly reduce the number of exemptions that would allow automakers to put thousands of self-driving cars on the road in the immediate future, but they said they could live with the compromise that calls for gradually increasing the number over several years.

“Self-driving cars have the potential in the future to reduce deaths and injuries from car crashes, particularly those that result from driver distraction,” Rep. Frank Pallone, D-N.J., said. “This bill allows for testing and deployment of self-driving cars to help the United States reach that potential sooner.”

Automakers praised lawmakers for moving the bill to increase the number of self-driving cars that can be operated on U.S. roads. General Motors Co. said in a statement that the measure “represents good progress toward a law that will facilitate realization of the safety, mobility, and environmental benefits of self-driving vehicles.” The company added a caveat that “more work is needed” before the bill is signed into law, however.

Safety groups complained the exemptions give automakers too much freedom to test self-driving cars on roads with other drivers.

“This bill leaves a Wild West frontier by pre-empting the states’ ability to do anything to protect consumer safety, while there is nothing yet at the federal level,” said John Simpson, Consumer Watchdog privacy project director.

The legislation prohibits states and other local jurisdictions from adopting regulations related to cars’ design, construction, software or communication. States still would be allowed to regulate registration, licensing, liability, education and training, insurance or traffic laws.

Michigan had already taken steps to position itself as a haven for self-driving car testing: last year, the state legislature passed into law a measure that allows robotic cars to be operated on any Michigan road without a driver behind the wheel.

Supporters of the measure moving now in Congress anticipate the U.S. Senate will take up a similar version of the self-driving measure this fall.

Lawmakers in the upper chamber have said they also are working on a bipartisan bill to regulate self-driving cars. They have released a set of principles that call for prioritizing safety, promoting innovation and strengthening cybersecurity, but have not agreed on specific language.