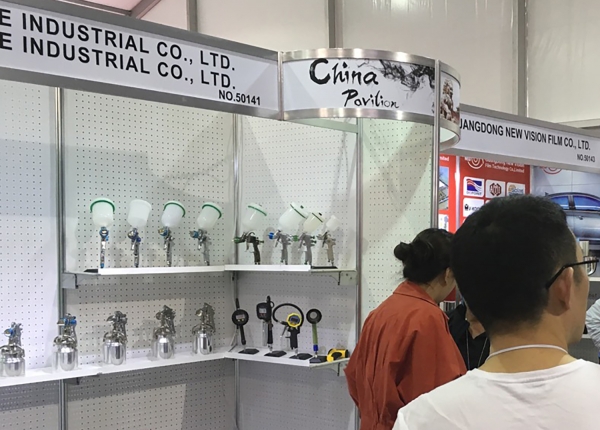 At this year’s SEMA show in Las Vegas, U.S. Federal Marshals took action against a Chinese company and seized each and every product from their booth, in the name of German spray gun manufacturer SATA, after SATA was awarded 2 million dollars of damages against the Chinese company for patent and trademark infringement that occurred at the 2013 AAPEX show.

As a manufacturer of high-quality products, enjoying an excellent reputation all over the world, SATA GmbH & Co. KG, a German manufacturer of products for the paint spraying industry, particularly of spray guns, paint cups, breathing protection equipment and filters, is continuously and successfully fighting against counterfeiters. SATA diligently monitors websites, the market and trade shows worldwide to protect its customers from low-quality fake products. When illegal copies are found at trade shows, shops or factories, SATA takes the necessary steps to ensure that the property law enforcement authorities like customs, Federal Marshals or police raid the properties and seize any counterfeit goods.

In November 2013, at the Automobile Aftermarket Products Expo (AAPEX) in Las Vegas, representatives of SATA detected several spray guns, posters and leaflets on the booth of Wenzhou T&E Industrial Co., Ltd., which infringed several of SATA’s registered trademarks and design patents. SATA’s attorneys filed a complaint against T&E with the District Court of Nevada, and requested a temporary restraining, seizure order, and a preliminary injunction. The court granted SATA’s requests, and ordered Federal Marshals to seize property at T&E’s booth.  In addition to the infringing and counterfeit products, federal marshals also seized posters, advertisement material, electronically stored data from laptops, cell phones, order books, and other documents.  The information was then copied and provided to SATA.

By analyzing the seized data, SATA gained a valuable insight into the organization of the infringer, and its network of suppliers, partner companies and customers.

Several months after the seizure, the District Court rendered a judgment in which T&E was ordered to pay SATA statutory damages in the amount of $ 2,000,000, plus SATA’s attorneys’ fees, and other costs. Further, T&E was permanently enjoined from using SATA’s trademarks and the subjects of SATA’s design patents.

T&E failed to pay the judgement, and SATA sought and received a Writ of Execution. In late 2016, SATA discovered through their monitoring system, that T&E would be an exhibitor at this year’s Specialty Equipment Market Association (SEMA) show in Las Vegas. Due to the Judgment and Writ, SATA was entitled to seize any assets of T&E in the United States until the damages due are balanced. So, SATA entrusted their attorney at Brownstein Hyatt Farber Schreck to contact the Federal Marshal Service and request a seizure action against T&E at the beginning of the show. The Federal Marshal granted SATA’s request and took action against T&E on November 1st, 2016, the first day of this year’s SEMA show.

During the seizure, all products from T&E’s booth were seized, including spray guns and other tools, motor parts, catalogs, posters, order books but also laptops and cell phones.  Even the name tag of the company was dismounted from the booth.

The data from the seized laptops and cell phones will be provided to SATA, which will again be very useful in SATA’s fight against counterfeiting activities.

In the two days after the seizure, SATA filed complaints against two new exhibitors at AAPEX and SEMA for patent and trademark infringement.
SATA will further monitor potential infringers, and their activities worldwide online, in the market, and at trade shows and will take actions against infringers consequently. Such actions are not limited to manufacturers of patent or trademark infringing products, but are also focused to dealers of SATA copies in any country worldwide.

More in this category: « Rearview Cameras Reduce Police-Reported Backing Crashes Self-Driving Car Accidents: Who Will Be Held Liable? »
back to top