This spectacular four-tone 1955 Chevy Nomad Wagon was built and designed by David Kindig of Kindig-It Design in Salt Lake City for AkzoNobel for the 2016 SEMA Show.

AkzoNobel kept it a secret until Nov. 2 at 1 pm when the company finally unveiled its 2016 SEMA celebrity vehicle to show attendees.

When the cover was removed by master car builder Dave Kindig, the four-tone 1955 Chevy Nomad Wagon received thunderous applause and everyone agreed that it surely did not disappoint.

Kindig is the owner of Kindig-It Design and stars on Bitchin’ Rides, a TV series featured on the Velocity Channel. He has designed and rebuilt hundreds of cars for collectors all over the world.

Kindig and his team put more than 1,500 hours into the build, adding nuances throughout, including flipping the bumpers, installing a Kicker stereo system and a whole wide range of new enhancements.  The Nomad was first manufactured by Chevrolet from 1955 to 1961 and then brought it back into production from 1968 to 1972.  Today, the ones made in the 1950s are the most coveted by car collectors and rebuilders that love working on them. 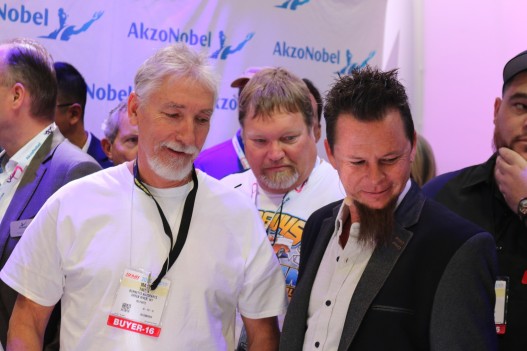 Kindig shows the car's owner, Mark Timlin of Burnett's Auto Parts in Green River, WY, what he has done with his 1955 Nomad during the unveiling.

As owner and chief designer at Kindig-It Design in Salt Lake City, UT, Kindig runs a state-of-the-art custom shop where mostly classic cars are converted into breathtaking creations. Kindig operates the shop with his wife, Charity, and they are well-known for their highly-rated reality show, Bitchin' Rides, which is featured on the Velocity Channel.

AkzoNobel and Kindig will work together over the next year to mutually develop a new custom color line of automotive paints. While announcing the AkzoNobel celebrity car, Kindig also discussed his new relationship with the company. “We are going to be developing a whole new line of amazing colors for AkzoNobel, with a classic look. These are colors that car lovers will want to use and painters will also want to spray. They will have a ton of depth and will be absolutely incredible. So hang on to your socks because this year is going to be amazing!”

Jennifer Solcz, North American Marketing Manager for AkzoNobel Vehicle Refinishes, made some opening remarks to the crowd at their booth prior to the unveiling. "AkzoNobel is proud to join forces with Dave Kindig, a true automotive artist, who is known throughout North America for his exceptional quality, workmanship and style," she said. "AkzoNobel is in the business of color, and we are dedicated to color innovation through product development and dynamic strategic partnerships."

"I'm thrilled to be working with AkzoNobel on developing this brand new custom color line," said Kindig. "Since I started spraying Sikkens Autowave, my projects have looked better than ever before. So I am super psyched because I'll now be able to combine my style and quality and mix it with these terrific products. To really open up and dial in the colors that I want to see on great vehicles--that's my goal with this new line."

The owner of the Celebrity Nomad is Mark Timlin, the owner of Burnett's Auto Parts in Green River, WY. When he saw his vehicle for the very first time at the unveiling, he looked shocked for a moment before smiling from ear-to-ear.

"The last time I saw that car was a year ago, and it was down to the bare metal," he said. "So when I saw it at the AkzoNobel booth, I was pleasantly surprised and absolutely thrilled. Dave Kindig is an amazing builder, and to be associated with him is a big deal. They filmed the build, and hopefully it will appear on an episode of Bitchin' Rides at some point so that people can see all of the creativity and hard work that went into this car."