The WD-40®/SEMA Cares 50th Anniversary Camaro made its debut at the 2016 SEMA Show in Las Vegas on November 3 during a press release hosted at SEMA’s booth.

Over the years, WD-40 has worked with some of the best car designers and fabricators on the planet, including Chip Foose, Ian Johnson from PowerNation and others.

For the seventh time now, WD-40 unveiled a stunning vehicle at SEMA to be auctioned off later to raise money for SEMA Cares, a charity that has been working with WD-40 on all of their SEMA rebuilds over the years.

The company and the charity joined forces again to create a custom 1967 Chevrolet Camaro to celebrate both the 50th anniversary of the SEMA Show as well as the 50th anniversary of the Camaro. It made its debut at the 2016 SEMA Show in Las Vegas on November 3 during a press conference hosted at WD-40's booth. The vehicle was then featured at the SEMA Cruise that concluded the SEMA show on Friday, Nov. 4.

The eventual sale of this spectacular vehicle will raise more funds for SEMA. By auctioning off the other six vehicles, more than $700,000 has been raised by the sales of these SEMA cars.

The WD-40®/SEMA Cares 50th Anniversary Camaro proceeds from the sale of the vehicle will go to Childhelp®, an organization that provides services to abused and neglected children, and the SEMA Memorial Scholarship Fund, which provides scholarships to students entering the automotive aftermarket.

The Camaro project was designed by noted car builder Neil Tjin and built in partnership with Tjin and instructors from Universal Technical Institute™. The engine, transmission, suspension, wheels and tires were installed on PowerNation™ TV, and the entire build showcased how WD-40 Company products are used by automotive professionals in their restoration and customization projects all over the world. 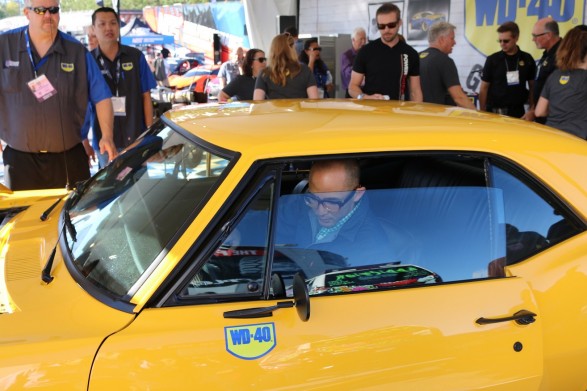 Car builder Neil Tjin checks out the interior of the WD-40®/SEMA Cares 50th Anniversary Camaro. Tjin did the entire build in an incredible four and a half weeks, unheard of in the industry.

Neil Tjin is one of the top up and coming designers within the automotive industry and has been involved in the sport compact market for more than a decade. Tjin has always been a strong, passionate individual, especially when it comes to the cars he creates. He is world-renowned for pushing the envelope and going against the grain.

Over the years, Tjin and his talented staff have been responsible for designing and building more than fifty high-profile vehicles showcasing their creative talents on numerous Hondas, Acuras, Nissans, Infinitis, Scions, Volvos, Chevrolets and Pontiacs. In recent years, Tjin has also teamed up with major OEM manufacturers such as Chevrolet, Pontiac, Scion and Honda North America.

Tijn was relieved to get the WD-40®/SEMA Cares 50th Anniversary Camaro done on-time and looking so fine because the vehicle's deadline was insane, he explained.

"We had to get this project done in four and a half weeks, while many shops would have needed something more like 12 months or more. I work primarily with the OEs, so this was an unusual job for us, but we loved doing it and we're so happy with the finished product. The people at UTI did a lot of work and I think we did an excellent job of showcasing a lot of WD-40." 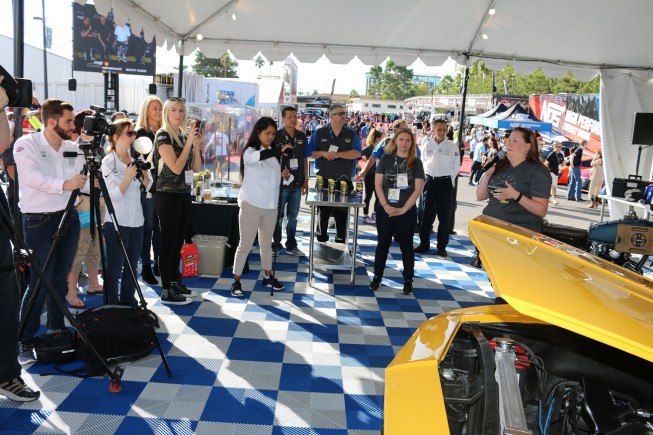 WD-40 Brand Manager Shannon Edwards is a veteran of these SEMA car builds and has seen firsthand the importance of the cause and the buzz that is always created with these show-stopping vehicles.

"This is a winning formula and it helps all of the parties involved--WD-40, SEMA Cares, the companies that donate their time and materials and the builders, such as Neil Tjin, who gain national attention with these cars," Edwards said. "Plus, we all do it for the charity, which makes it even more special!"