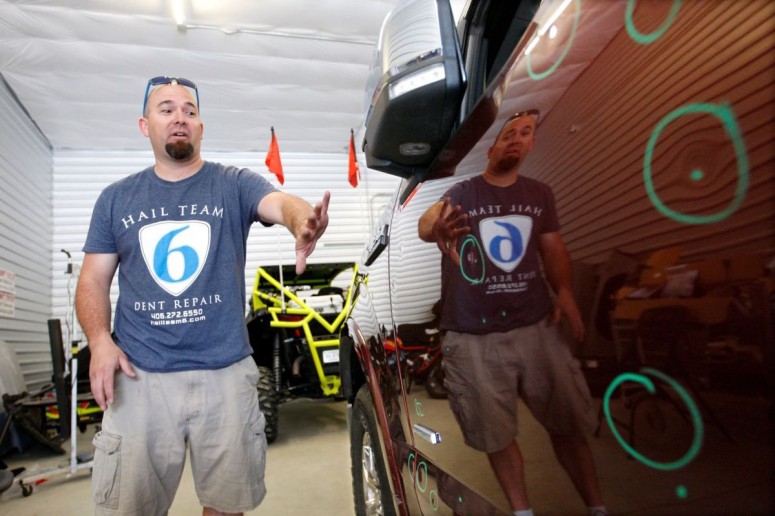 Jason Zapata launched his auto-body repair business in the wake of the 2014 hailstorm that pummeled Billings, and he’s gearing for the next big wave over the next few months.

The 36-year-old Billings man owns Hail Team 6, a one-man repair shop that works with auto-body shops around town. Following the May 22 hailstorm that pounded the West End of Billings, he’s expecting a rush of business.
During the last week of May, he worked on a new red Ford F-150 pickup with a cracked sunroof and quarter-sized dents all over the hood and door. Zapata did about $1,000 worth of work in his shop at 2120 Lampman Dr. using a method called paintless dent repair, where he pushes dents out from the inside to preserve the paint job.
A Huntley native, Zapata has done repair work for 15 years nationwide. He’s repaired vehicles in California, Texas and other places after hailstorms there, gaining experience on different kinds of vehicles.
This summer, however, Zapata said he plans to stay home.
“We like the storms because that’s what our business is based on. We pray that no one gets injured, obviously. But it’s a great economic boom for any town that has them,” Zapata said.
This most recent weekend storm swept through the West End and north along Airport Road and into the Rehberg Ranch subdivision, breaking windows and denting vehicles.
Since then, phones have been ringing constantly for roofers, auto repair shops, glass installers and other contractors involved in storm cleanup.
In 2014, contractors did $105 million of roofing, fencing and foundation work in Billings, most of which was related to the hailstorm, according to the city’s building department.
That storm also attracted hundreds of out-of-town storm chasers, who did roofing work and other repair. Many stayed for a few months, boosting revenue for local hotels, restaurants and bars.
Some of those companies stayed in town and are continuing to compete with long-time roofers, said Jake Martin, vice president of Empire Roofing Inc., which his grandfather founded in the 1950s.
“Healthy competition is always good. In our eyes, as long as they’re a legitimate company that does everything the right way… then we’re totally OK with that,” Martin said.
“The good ones actually upped the whole level of professionalism. The bad ones, they hurt everyone else’s name,” he added.
Martin said Empire has gotten a steady stream of calls since the storm. Many are repeat customers who used Empire during the last storm, or they were burned by a storm chaser the last time and want a local brand, he said.
This storm hit a smaller swath of town and affected fewer people than in 2014, Martin said, but the damage is worse. Temperatures during hail storm were in the high 50s to low 60s, which hardened the roof shingles and made them more brittle, he said.
“It actually fractured and put holes in shingles while before it bruised,” said Martin, who is also vice president of the Montana Roofing Association.
Meanwhile, insurers have raised deductibles or dropped altogether homeowners who have filed multiple claims from past storms in the last five years.
Some homeowners are opting for smaller repairs to avoid filing additional claims, Martin said.
Empire has about 50 employees, which is typical for the summer.
Local glass shops are also busy fielding repair requests from hail damage.
Ron Becker, owner of Becker’s Glass in downtown Billings, said he expects his biggest rush to come in the next few weeks after homeowners consult with their insurance carriers.
Beckers Glass sells and installs window panes and other types of glass found in the home. The shop has three employees, who are typically busy this time of year without a storm, Becker said.
Over the next three weeks, workers will be measuring the spaces to install new panes before doing the work, and Becker expects a second wave of calls down the road.
“More than likely, it will carry on for the rest of the summer,” Becker said last week.
Zapata said he expects the same for Hail Team 6. He took some time off this holiday weekend but is planning for business to accelerate through the fall.
Long-term, Zapata said he hopes to use the storm as a springboard to grow the business and avoid having to travel for work. He added that he’d like to start hiring employees and gain more direct customers.
“Hail is insurance paid, and the profit margin is greater,” he said.
We would like to thank Billings Gazette for reprint permission.

Read 1750 times
More in this category: « Greg Coccaro Sr. Passes Away at 66 CAWA and Auto Care Association Partner on Industry Job Board »
back to top