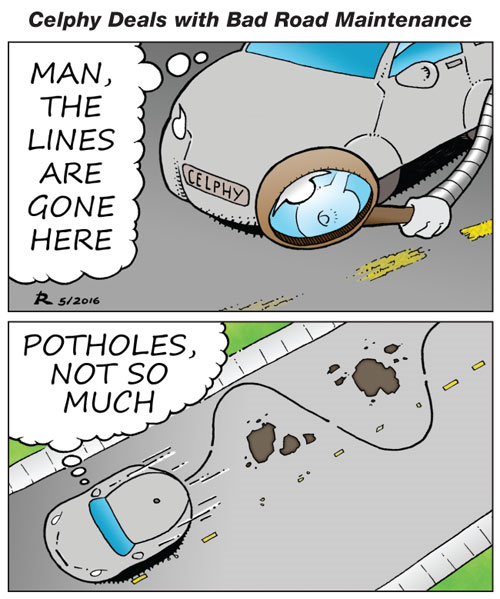 “It can’t find the lane markings!” Kerssemakers complained to Mayor Eric Garcetti, who was at the wheel. “You need to paint the bloody roads here!”

Decaying infrastructure has become a roadblock to the development of self-driving cars, vexing engineers and adding time and cost. Poor markings and uneven signage on the 3 million miles of paved roads in the United States are forcing automakers to develop more sophisticated sensors and maps to compensate, industry executives say.

Tesla CEO Elon Musk recently called the mundane issue of faded lane markings “crazy,” complaining they confused his semi-autonomous cars. An estimated 65 percent of U.S. roads are in poor condition, according to the U.S. Department of Transportation, with the transportation infrastructure system rated 12th in the World Economic Forum’s 2014-2015 global competitiveness report.

Tesla, Volvo, Mercedes, Audi and others are fielding vehicles that can drive on highways, change lanes and park without human help. But they are easily flummoxed by faded lane markers, damaged or noncompliant signs or lights, and the many quirks of a roadway infrastructure managed by thousands of state and local bureaucracies.

In other developed countries, greater standardization of road signs and markings makes it easier for robot cars to navigate. In the U.S., however, traffic lights can be aligned vertically, horizontally or “dog-house” style in two columns. Pavement markings use paint with different degrees of reflectivity—or don’t exist at all.

“If the lane fades, all hell breaks loose,” said Christoph Mertz, a research scientist at Carnegie Mellon University. “But cars have to handle these weird circumstances and have three different ways of doing things in case one fails.”
To make up for roadway aberrations, carmakers and their suppliers are incorporating multiple sensors, maps and data into their cars, all of which adds cost.

Mercedes says its “drive pilot” system works even with no lane markings. The system—which incorporates 23 sensors— takes into account guard rails, barriers, and other cars to keep cars in their lanes up to 84 miles (135km) per hour, under “suitable circumstances.”

Estimates are that initial semi-autonomous features add $4,000 to a car’s price and that carmakers will have to spend more than $1 billion over the next decade in research investment for even more sophisticated autonomous features.