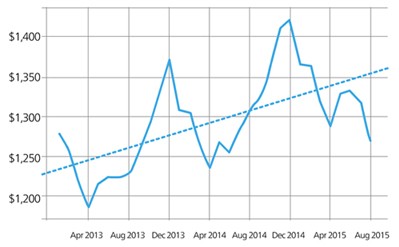 Average Cost per estimate when Parts are Present

Every winter, Greg Horn, Mitchell’s vice president of industry relations, said that he begins monitoring the number of parts used during the average repair estimate. “Notably, the number of parts on the average estimate increases, usually by over 1.5 parts per estimate and total parts spending typically increases by more than $100,” he said during the company’s latest industry update presentation for the fourth quarter of 2015.

Horn noted that parts utilization usually peaks in December and falls off in January onwards due to the increased number of accidents that time. He said it is due to poor road conditions and what he referred to as “drivers’ amnesia” when winter begins.

In addition, Horn said that it is typical for total loss percentages to increase during the early winter and then fall off during more severe weather.

Horn said that none of the alternate parts measured — aftermarket, remanufactured or recycled — increased during the same period. “What we’re seeing is more repair going on from that first quarter to the third quarter,” he said.

He attributed it to parts prices increasing and labor rates staying flat. “You can devote more repair hours per part if the cost is going up and the labor rate is staying flat,” he explained.

Looking ahead to changes in 2016, Horn said that he forecasts the trend will most likely continue.

Overall, there is an increase in the number of aftermarket parts being utilized compared to a year earlier, while fewer remanufactured parts are being used. “We’ve seen a lot of the remanufacturing facilities across the United States close down because it’s not as profitable as it used to be,” said Horn.

Length of Rental Continues to Increase

Part of Mitchell’s industry report included statistics on Enterprise Rent-A-Car’s average Length of Rental (LOR) for repairable vehicles. Frank LaViola, assistant vice president of insurance replacement for Enterprise Rent-A-Car, said the U.S. average LOR increased in the third quarter of 2015 to 11.4 days overall. This is an increase of .4 days over the same time period the year before.

“We continue to see a rise in such factors as claims frequency, miles driven and registered vehicles per licensed drivers,” said LaViola.

Horn added that the overall severity and number of parts per estimate were stable in Q3 2015 compared to 2014. “This suggests that the increase in total loss frequency for the quarter is driving length of rental,” said Horn.