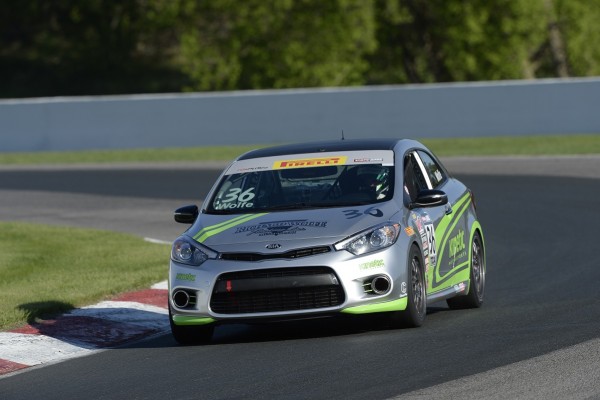 The launch of the Kia Forte Koup in 2010 signaled a change at Kia Motors America. That same year the company partnered with Kinetic Motorsports’ racing organization in Georgia. “Kia got involved in racing with the Forte Koup to help change the perception of the Kia brand in the United States and to showcase the Forte Koup’s durability, reliability and performance,” said Mike Ofiara, product communications, Motorsports, for Kia Motors America.

During six years of road racing in the U.S., Kia Motors America and Kinetic Motorsports won seven championships. In 2014, every Kia model that raced won a national title, from the Rio five-door in SCCA B-Spec to the Forte Koup and Optima turbo in the Pirelli World Challenge (PWC).

“Kia is proud of our team and drivers for their outstanding achievements and we thank them for their hard work and dedication to the brand,” said Kia Motors America. The company will be stepping back from the factory-supported PQC Grand Touring Sport effort in the United States in 2016 but will continue to support Kinetic’s championship-winning privateer program in the Touring Car A class. “With exciting, new, rear-wheel drive product in our pipeline, we’re also looking forward to a return to the track in the near future,” the company added.

Autobody News asked racing champion Jason Wolfe about his involvement with the Kia racing team. Wolfe has driven Kia’s Forte Koup in TCA for the past two years and brought home two championships.

Q: Congratulations on your racing successes. How did you get your start in racing?
A: After watching the movie, “Catch That Kid,” based off of kids robbing a bank using go karts for get-away vehicles, my dad and I decided to check out the local kart track. From there we were totally hooked.

Q: What do you enjoy most about the sport?
A: What I have enjoyed most in my racing career is learning what it takes to be the best I can be. Whether it is from a driving perspective, set up perspective, physical perspective or just socializing, there is always so much to learn and there is always an area in which you can better yourself.

Q: We’ve heard that that your racing hero is Tommy Byrne. What do you admire most about him?
A: First off, he is the kind of guy who tells it like it is no matter what, and I think that is what has helped me the most. Drivers who are coming up through the ranks need to know when they have made a mistake and when Tommy was my coach, I sure knew when I did something wrong, yet he was also one of the first to congratulate me when doing well. Also, the fact he more or less hustled his way into Formula 1 and the story behind it is just more to be in awe over.

Q: You’ve said in the past that Mid-Ohio is your favorite track. Can you please tell us why?
A: I chose Mid-Ohio as my favorite track because of how technical it is and how hard it is to pass because of that. It really separates the men from the boys. Also, it’s only 40 minutes from home – can’t beat that!

Q: What are some of your past achievements and what are your upcoming race plans?
A: My most notable and recent past achievements have been with Kinetic Motorsport/ Kia Racing when we brought home two consecutive championships; Rookie of the Year; and the guys brought home Crew of the Year for those two years also. Best two years of my racing life. We worked very well together and I definitely learned a lot while under their wing. Unfortunately my 2016 plans are still up in the air but we’re looking into a few different options, just trying to find the right fit!

Q: Is there anything else you would like to share with readers/ fans in the collision repair industry?
A: Set up very close to your nearest race track!