“If you could cycle 10 to 12 cars in eight hours through your booth, cure filler in one minute, and apply four coats of primer and have it cured 100 percent and sanded in 15 minutes, how would you run your business differently?”

After spending over 30 years in the industry, where he owned eight body shops in Arizona and Nevada, managed others, and worked on running a market and a couple of acquisitions for Caliber Collision, O’Neill was “trying to figure out what to do next, other than retire and play golf.” 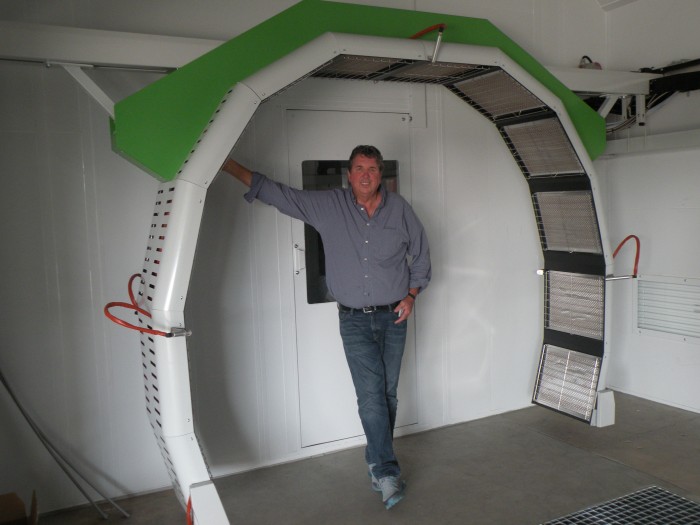 That was when fellow industry veteran, John Parker, introduced him to a new technology that had been transforming body shops overseas, and was ready to make its way to the United States.

These gas catalytic infrared drying robots, created by Green Tech Italy, have been making waves in Europe, Australia, and the Middle East for the past eight years.

“Europe is like 15 years ahead of the U.S. when it comes to meeting the demands insurers can put on a company, not to mention competing with insurance owned collision networks. Body shops were forced to be as efficient as they could be,” said O’Neill. “The average shop in England makes 1 percent net, and a number of the networks are owned by insurance companies.”

He added that shops that operate with the technology and process Bodyshop Revolution offers in the European market make 10% plus in comparison.

O’Neill acknowledges that because the U.S. is ten times bigger than, say, England, it’s going to take a lot longer for the US market to get to the demands and constraints of the European market, if ever. O’Neill feels there is a window of opportunity in our market; with the proper technology and process shops can exceed the current metrics and produce more products in a clean, stress-free environment.

A handful of shops in the U.S. have taken advantage of this new technology since O’Neill and Parker obtained equal shares of North America distribution rights one year ago. When paired with the duo’s “Theory of Constraints” process for body shops, it becomes BodyShop Revolution.

“We were able to easily integrate the Green Tech (Robotica EXICO 6000) curing technology into our process,” stated Dan Sjolseth of Superior Service Center in Apple Valley and Eagan, MN. “It has allowed us to work more continuously during the repair and priming process, and we can begin reassembling the vehicle for same day delivery immediately upon exit from the paint booth. The equipment has not only impacted our throughput, but has actually removed quality concerns commonly associated with high production processes.”

The Rydell Collision Group, which has 60 dealerships in 15 states, is another example of shops that have implemented BodyShop Revolution.

“With repair facilities facing pressure from insurance companies to repair vehicles faster, better and cheaper, the BodyShop Revolution process and equipment has given us that realistic opportunity,” said Randy Sattler, body shop manager for the collision group. “Like many shops, over the years we have tried different estimating, repair planning, and scheduling processes, as well as different types of equipment. Most of what we tried helped, but because they were not tied together as a complete system, we never felt like we were able to truly capitalize on the investment or capture what we anticipated or expected. The Bodyshop Revolution process and equipment ties everything together. It truly is a complete repair process from estimating to delivery of a repair, with every step linked to each other. Because the repair system is linked together, it has made all of our employees’ lives easier; from the administrative staff to all of the technicians on the floor. It has been a game changer for us.”

So, how exactly does BodyShop Revolution work?

“We have taken a holistic approach based around the Theory of Constraints in revamping the way that we process cars in the collision repair process,” said O’Neill. “We aren't any smarter than many in the collision business, but simply that we have some new technology that we never had available before. As with any new technology, you would say, ‘what can we do with it and how can we build a process that gives us the biggest benefit?’”

Key questions when looking to create better than average estimates:

"The equipment works exactly as advertised,” said Aaron Marshall, president of Marshall’s Auto Body in Waukesha, WI. “We are saving half the time on drying fillers and paint.”

“The process requires a lot of discipline to implement, but it works,” said Darrell Amberson, president of operations at LaMettry’s Collision, with eight locations in Minnesota. “The trainers are competent and effective, which helped make the transition easier.”

O’Neill stresses that the technology itself is not enough to ensure profit.

“It doesn’t make a difference if I can dry 100 cars super fast if I’m just throwing them into a chaotic environment,” he said. “Essentially, we want to process cars with no lines and be able to work nonstop.”

O’Neill went on to explain, “If there are eight technicians in the shop, then there are eight cars being worked on. When the technician’s vehicle is in the paint booth, we won’t give that technician a new car because it would disturb the process. While the car is being painted, the technician can take that time to check repair procedures, identify a welder, figure out what type of high-strength steal will be used, and check the estimate. If there is still time left after all that, they can help another technician get one more car out.”

As O’Neill and Parker travelled throughout the country, making multiple trips to each shop to spread the word about BodyShop Revolution, they began to realize there had to be a more effective way to really show the owners how the process works. That’s when O’Neill decided to build a model shop -- Body Shop Express in San Diego, CA – so shop owners can see firsthand how BodyShop Revolution can enhance their business. A built in camera system will allow O’Neill and Parker to access the facilities remotely while giving presentations.

Body Shop Express is scheduled to open the week of June 29, and is located at 3777 Gaines Ave, San Diego, CA, 92111. O’Neill said the shop will be on the road to I-CAR Gold certification when they open and will also be certified to work on the new Ford F-150. He is also working with a handful of OEMs toward certifications, as well as Assured Performance. O’Neill disclosed that Body Shop Express will have a couple DRPs to start, and several others are interested.

“Bodyshop Revolution gives insurance partners metrics they have never seen before, and in the process, it not only gives employees their sanity back, but ultimately their lives back,” said O’Neill. “We give our team members the ability, once and for all, to make our insurance partners say, ‘we want more of this.’"

O’Neill said one of the hardest parts about owning a shop in the past was not seeing his family enough. He hopes that BodyShop Revolution can prevent the shop owners and technicians of today and tomorrow from having that problem.