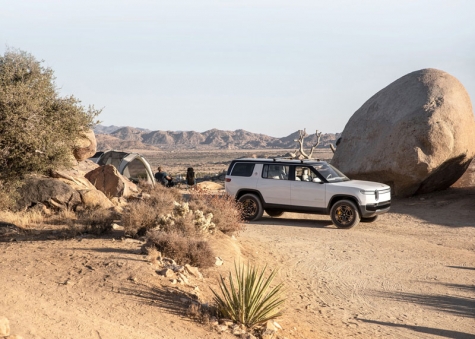 The following article contains forward looking statements but do not imply endorsement for investment purposes. Other companies, such as Tesla, have firmly established market share and dominant market positions. ---Ed.

During Day 2 of the virtually-conducted November Collision Industry Conference, the Future Disruptions Committee, chaired by Terlep and well-known industry icon Jake Rodenroth, gave a presentation and conducted a panel discussion surrounding electric vehicles and what their advent could mean to the collision repair industry.

Given the gravity of the issues electric vehicles present, it is worth revisiting this subject in more depth.

“The future is coming at us with alarming speed,” said Terlep. “In less than 15 years, the UK wants to ban the sales of all except electric cars. In the U.S., California is following the same path.”

Rodenroth noted, “It seems like it wasn’t that long ago the industry was all talking about the use of high-strength steel and how to repair it. Then the discussion turned to aluminum and the all-aluminum Ford truck. Then it was ADAS systems and how to do proper post repair calibrations.

"Now it’s electric cars. I’m not sure we have all figured out high-strength steel yet and the industry has made several technological leaps since. We all need to come up to speed.”

In his CIC presentation, Terlep made note of some of the more dramatic changes...

...that will occur as more and more electric cars enter the U.S. fleet:

Three key electric OE’s to watch, and the three featured in the CIC panel discussion, are Lucid, Rivian and Audi.

Lucid was founded in 2007 under the name Atieva, originally focused on building electric vehicle batteries and powertrains for other vehicle manufacturers. The company rebranded itself as...

...Lucid Motors in October 2016 and officially announced its intent to develop an all-electric, high-performance luxury vehicle.

The top-line Lucid Air Dream boasts a 1,080-horsepower electric motor and a 500-mile projected range, will turn a quarter-mile in under 10 seconds and will carry an almost $162,000 price tag. Its 900-volt electric architecture will be the industry’s fastest-charging vehicle to date, with a rate of 20 miles of travel per minute of charge.

Lucid is expected to start delivering vehicles in April of this year.

According to its website, Lucid will use an “aircraft-inspired riveted and bonded monocoque body structure replacing spot welds.” The manufacturer claims this will...

A Lucid representative was not available to answer specific questions regarding collision repair procedures or training. However, according to its website, Lucid will have a nationwide network of Service Centers, 20 to start in eight major metro locations on both the east and west coasts. Mobile service providers and certified collision repair centers will be linked to Lucid’s centralized customer care group to address anything that cannot be remotely diagnosed and repaired.

Described by Rawlinson as a “fusion of art, science and technology,” look for Lucid models on the street by early summer this year.

Rivian, an electric-vehicle start-up company based in California, plans to soon start producing two all-electric truck models at a plant in Illinois, formerly occupied by Mitsubishi.

These will include the R1T pickup, which will be the first to debut, followed closely by the R1S SUV. It is unknown at this point how many the company plans to sell or how they will be sold, be it through a traditional dealership network or some other system.

In cities where Amazon has a major presence...

Amazon has committed to going emission-free by the year 2040, 10 years ahead of the guidelines set forth by the Paris Climate Agreement.

Terlep notes, “It won’t be long before shops will need to dedicate a portion of their shop and personnel to electric vehicles. Training and use of proper repair procedures will be crucial.”

Rivian representatives were not at liberty to discuss collision repair plans for their products at this time, instead deferring to an announcement in the spring of this year.

On deck for the more than 100-year-old company is the Audi e-tron for 2021, the “first electric SUV built with Audi DNA,” with a reported 402 horsepower, able to turn 0 to 60 mph in under 6 seconds with a 222-mile range. Starting at around $66,000, it features quattro® all-wheel drive. The e-tron also comes in a “Sportback” configuration.

Body construction is a combination of steel and aluminum. Audi’s goal is to have one-third of all its vehicles electrified by 2025.

The company’s website notes charging an Audi e-tron is as simple as contacting Amazon, who will have a local contractor set up a 120- or 240-volt, 50-amp charging outlet in the owners' garage. Away from home...

...there is a growing number of commercial charging stations available.

Mark Allen, manager of collision, equipment and EV after sales service at Audi of America, was kind enough to answer a few questions.

Audi has been around for 100 years. Is this its first electric vehicle?

Audi has had hybrid electric cars since 2013. The e-tron is a completely new generation of vehicle for us and the first full-electric car.

Will you have a certified network to handle collision repairs on your electric vehicles?

Right now, we have no plans for a certified collision shop network for our electric vehicles. However, we are specifying that any mechanical or especially electrical work related to collision repair be completed by an Audi dealer. They have the training, tools and equipment to repair our electric cars properly and safely.

We allow our current Audi Authorized Collison Repairers to do collision repair work on the vehicle, but not battery or any HV electrical repairs. That must be done at the dealer.

What is the most important thing techs need to know before working on an electric vehicle?

Before touching our EV, or any EV, it’s important that repairers first...

...look at repair procedures and safety precautions. Repairers can be seriously hurt, or worse, if they don’t follow proper procedures.

What will happen with a collision-totaled vehicle? How will the battery be safely disposed of?

EV batteries must be properly disposed of according to EPA guidelines. Right now, there are two companies in the U.S. that can handle it. I am sure in the future as EV’s proliferate, additional companies will emerge.

In our case, the batteries we use are modular, so if one section is damaged or goes bad, it may be possible to replace only that module.

Will you have parts restrictions for EV parts?

Yes, on structural and electrical components.

What kind of personal protection clothing will technicians need to wear to work on your EV?

Depending on the work being done, a complete protective suit consists of a helmet with integrated special arc flash protection face shield, balaclava hood, arc flash protection jacket or lab coat, overpants, and three pairs of gloves including an inner cotton glove covered by an insulated rubber glove, covered by a leather glove. The outfit is completed by electric hazard-rated work boots.

One of the drawbacks to electric-only vehicles has always been travel range. Depending on the vehicle, battery used and road and other environmental conditions, EVs can travel 200 to 500 miles on a single charge.

Unlike internal combustion cars that can be refueled at the ubiquitous gas station, EVs must be charged at home or at outlets provided by companies like Electrify America, one of the largest public electric vehicle DC fast-charging networks in the U.S., with more than 500 charging locations totaling more than 2,200 individual charging units as of 2020.

Considering that before an infrastructure of gas stations was built, gasoline for very early cars was sold in one-gallon cans at hardware stores, this is the electric equivalent.

Share This:
Read 1095 times
More in this category: « In Reverse: The ‘80s---Foreign Cars and Other Changes Herb Lieberman---A Life of Service »
back to top