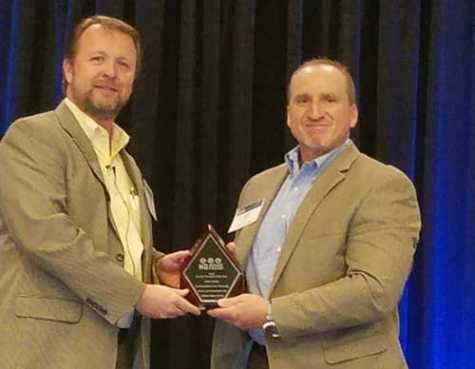 Brian Nessen presents John Spoto with the Service Provider of the Year award.

People have been repairing collision-damaged trucks since August Fruehauf stuck a trailer behind a Ford Model T in 1914 to create the first semi-trailer rig.

Oddly, it is only within the last year or so---over 100 years later---that the collision repair side of the trucking business started to coalesce as an industry. The industry’s development was recently accelerated by two key events.

The Technology and Maintenance Council, better known simply as the TMC, has been around since 1956. It brings fleets, manufacturers, suppliers and other industry stakeholders together to solve the industry’s toughest problems regarding transportation equipment. The TMC is an integral part of the American Trucking Association, formed in 1933 to represent the nation’s motor carrier industry.

The TMC’s latest event, dubbed “Beyond the Frontier of Maintenance,” was held at the Georgia World Congress Center in Atlanta from March 18--21. The main focus of the TMC has traditionally been fleet maintenance and mechanical repair, although a year ago the organization started looking at the complexities and dynamics of HD collision repair.

Everyone knows that it’s bad enough to be in a collision with the family car, even if there aren’t any injuries. But when a commercial truck is involved in a collision, there is a lot more to consider. This is explored in the “Repair Procedures Roadmap” initiative chaired by Joey Fassett, president of Al’s Auto and Truck Repair in Exeter, NH.

The Roadmap begins with “pre-planning” for an accident along a truck’s usual route. (Trucks are rarely near their home port when an accident occurs.) It also covers how to deal with damaged freight or preserving freight, how to preserve and deal with accident evidence, and more.

Unlike the auto industry, the HD truck OE manufacturers do not provide collision repair procedures and guidelines, or even position statements on collision repair, for several reasons. The HD industry is then left to its own devices to create its own repair procedures based on best practices, accepted protocols and what information they can glean from the manufacturers of a truck’s component parts.

View the embedded image gallery online at:
https://www.autobodynews.com/index.php/gary-ledoux/item/17444-truck-topics-hd-events-address-collision-issues.html#sigProId4420b2a70f
More in this category: « Truck Topics: Truck Vs. Auto Collision Repair – An Overview In Reverse: The Birth of I-CAR »
back to top