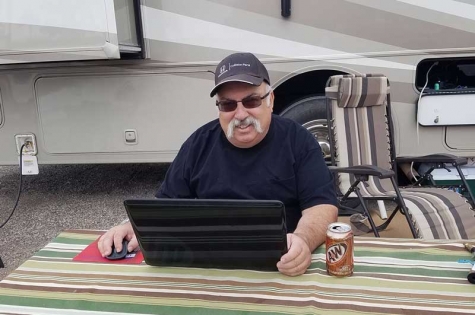 Gary Ledoux, author of “YesterWreck: The History of the Collision Repair Industry in America,” is enjoying his retirement after working for Honda for three decades.

If you’ve been in the collision repair industry in any capacity within the last decade or so, you likely know who Gary Ledoux is.

He wrote for Autobody News for several years, is the author of five different books, including one about the history of collision repair in America, and played an integral role at American Honda when it developed its ProFirst Body Shop Certification program in 2010.

Now semi-retired at age 68 and living in Jacksonville, FL, Ledoux is currently working on a book about the history of his hometown fire department, with a working title of “Nashua’s Bravest: The History of Firefighting in Nashua, NH.”

In 2018, Ledoux published his fifth book, “YesterWreck: The History of the Collision Repair Industry in America,” an 860-page book that has been getting positive reviews from people throughout the industry. Four previous books centered on Old West history.

Ledoux has embraced the stereotypical retirement plan, purchasing a 37-ft. Itasca motorhome that already has 25,000 miles on it. He’s driven from Palm Springs to northern California, across the U.S. from California to Florida and from Key West to New Hampshire, and has big plans to see more of the country firsthand within the next few years.

Ledoux’s No. 1 goal in retirement is to be active and pursue his creative passions, such as writing and travel. He has learned by example that if you don’t proactively pursue a productive retirement, things can get old quickly.

“One of my uncles had a great career, but he didn’t know what to do when he retired,” he said. “He ended up watching television 24/7 and died at 78 without really enjoying his retirement. I decided that that wasn’t going to happen to me.”

Ledoux took business and vocational classes in high school, then spent some time at NH Voc-Tech College. He landed a series of jobs at various local parts jobbers, PBE jobbers and car dealerships. He worked the parts departments at Toyota, Alfa Romeo, Subaru and Acura stores, as well as selling new vehicles at one Ford dealer and working as a service advisor at another.

In 1973, Ledoux tried to become a firefighter in his hometown of Nashua, but...

Previous Page Continue reading »
Read 234 times
More in this category: « 'Body Bangin’' Podcast Focuses on Hot Industry Topics How to Get Your Customers to Trust You in a Skeptical World »
back to top