Diving Into the Fascinating World of Fasteners 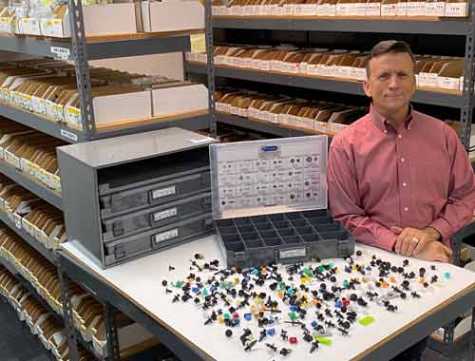 CEO Russ Ramsey is launching a website that will enable shops to make a profit on retainers and make it easy to find the correct hardware for each repair.

How many bumper covers, fender liners and plastic shields are currently sitting in the middle of the road in this country?

I would guess thousands, and why are they there? Undoubtedly one of the main reasons is that one or more retainers---aka fasteners, bolts, screws, clips and rivets---failed.

Why? Due to fatigue, of course, but in many cases it’s because they were incorrectly installed or the wrong ones were used.

Since 1988, the people at Blue Vista Data Systems (BVDS) in Las Vegas, NV, have created efficient systems to turn lost money into profits when it comes to clips and fasteners.

Every auto body shop on the planet has a plethora of retainers with specific applications, and with more than 700 car models out there containing an average of 30 locations requiring them, it’s a big deal.

The company recently launched a new website, bluevistadata.com, containing more than 28,000 retainers, broken down by location, OE designation and cost, complete with diagrams and specs for each.

With seven programmers working day and night to get the site clicking like a new Tesla, BVDS launched it July 1.

The site lists every retainer and its location, and is designed so anyone can use the system without changing their current distributor.

For more than three decades, BVDS has been a pioneer in the development of many of the retainer-related inventory and invoicing systems used today.

CEO Russ Ramsey explained retainers are small in size and often forgotten, but their impact on a shop’s profits can be significant. Things like retainers and other smaller items are often not included in estimates.

It’s the old Catch-22---if you invest in too many retainers and they never get used, that’s obviously problematic. But if you don’t have the right ones on hand, that can be even worse, possibly cutting into your cycle time.

“We have been in this business for a long time and have helped a lot of shops to make money on retainers, by making it easier to find the right ones and invoicing them correctly,” Ramsey said. “Our website has tackled the problems associated with retainers because with this system, all of the information they need is right there, with photos and drawings and an easy way to track them.

"It also enables your shop personnel to find out what they might need from the OE dealer prior to the repair.”

Annually, the overall number of OE retainers spike because every time an OE gives a vehicle a facelift or re-engineers it, new fasteners hit the market. If you’re not on top of it, you might be lost, especially if you’re working on a 2021 car, for example.