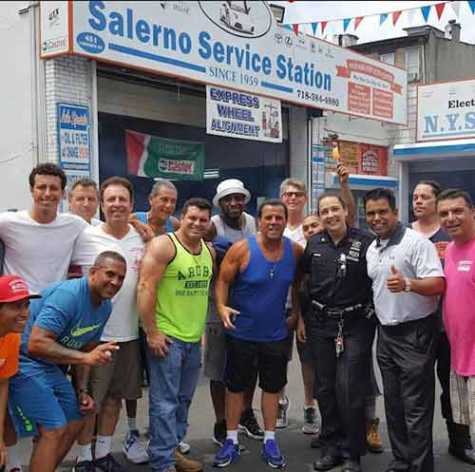 Many of Brooklyn’s most colorful characters stop by Salerno’s to share stories and hang out.

“If my tenants can help others because of this, that’s what we are looking for,” he said. “A lot of people have told me about charitable things they’ve done after getting help from us and that always makes me smile.”

Salerno is currently tapping into more than his allotted 15 minutes of fame, but he’s not about that. When he sees someone in need, he doesn’t hesitate to help them in any way he can.

Salerno’s selfless act led to a big story in the New York Times and an appearance on The Ellen Show. He’s pleasantly surprised by all the hoopla, and a little reluctant to receive the praise and acclaim, according to son Sal.

“My dad does stuff like this all the time and people don’t know about it,” he said. “He went to Texas one time to save 63 puppies from being destroyed. We have a friend who owns a pet shelter and when he told my father about it, he hopped in one of our Sprinter vans and drove 50 hours roundtrip. Some of our tenants now own those dogs, so we get to see them all the time. They call them ‘Mario’s dogs.’

"In addition, we close during the holidays and invite all of the local schools here to celebrate Christmas. We get a Santa and go way over the top with decorations and small gifts for the kids.”

The body shop portion of the family business repairs 35 to 40 vehicles every month in a hyper-competitive market, where “accident chasers” are a reality.

“Here in this area, shops will use their police scanners and then rush over to where the accidents are and try to get the car towed to their shop. We have been around long enough and have a great reputation for being honest," Salerno said. "So, we don’t have to chase accidents or rely on DRPs for business, because people know who we are and that we’re not just into this for a quick buck.”

Although Salerno does not want to disclose how much money he would lose due to not collecting rent in April, the Times estimated he was likely foregoing more than six figures in rental income.

“It’s not about the money,” he said. “These are unique times and we need to work together to make it through this. I learned long ago that money isn’t everything. I thank God every day for being in a position where I can do this.”

View the embedded image gallery online at:
https://www.autobodynews.com/index.php/ed-attanasio/item/19867-body-shop-owner-forgives-rent-for-200-tenants.html?start=1#sigProIdb4ae95999e
More in this category: « Western Shops Deal with Uncertain Times CA Tech Schools Teach Virtually and Adapt to Pandemic »
back to top