Day Job/Night Job: Painter Donnie Inman’s Art Gets Him Out of Prison 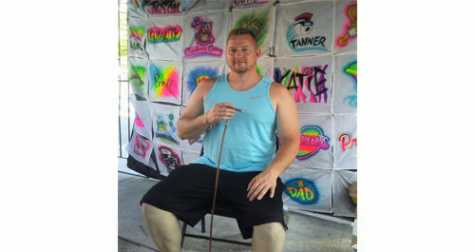 Donnie Inman got released from prison early because of his artwork and collision repair skills, both learned while inside Ross Correctional Institution in Ross County, Ohio. Donnie Inman

If you’re a pot grower, the last thing you want to do is get busted on Marijuana Eradication Day.

It’s irony in its cruelest form, and something Airbrush Artist/Painter Donnie Inman experienced when he was arrested in 2008 for growing 150-plus plants valued at more than $150,000.

Inman, 34, of Chillicothe, Ohio, was a shocked and concerned young man without few options after the arrest. When he was sentenced to eight years for the illegal cultivation of marijuana and sent to the Ross Correctional Institution in Ross County, Ohio, Inman’s future wasn’t bright.

Prison is never fun and even though he’s a big guy and not a violent person, Inman had to fight to avoid being victimized by other inmates. “One guy had issues with me for some reason, so he hired another inmate (known as “hitmen”) to give me a beating, he said. “But, someone tipped me off and I was waiting when the hitman came to my cell. Let’s just put it this way—I had to deal with it and no one there messed with me anymore.”

Dissuaded but not defeated, Inman began using his artistic skills to rise above the havoc of daily prison life. “All I had was some pencils and paper and got into the prison’s art program,” he said. “Pretty soon, people were looking at my artwork and the assistant warden really liked some of my stuff.”

After painting a mural that was well-received by prison administrators, Inman decided to ask for airbrush equipment and supplies, he said. “The assistant warden was impressed by my work and was very supportive. She pulled some strings and got me an air compressor and some airbrushes, even though my parents paid for it. It was awesome and once I had the equipment, I began painting everything—canvasses, motorcycles, helmets, t-shirts, you name it!”

With 17 months still left on his sentence, Inman received an early release in 2016, surprising literally everyone, including himself.  When Ross County Common Pleas Judge Michael Ater gave him the great news, Inman, he knew that this was an amazing gift and a golden opportunity to change his life.

View the embedded image gallery online at:
https://www.autobodynews.com/index.php/ed-attanasio/item/18689-day-job-night-job-painter-donnie-inman-s-art-gets-him-out-of-prison.html#sigProId1a3b3615b7
More in this category: « Do You Know Anyone Who Needs to “Digitally Diet?” “Booth Talk” is a Podcast Created by a Refinisher for Refinishers »
back to top