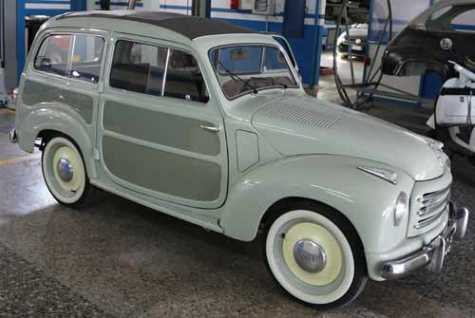 The shop does three to four full vehicle restorations annually to create work during the downtimes. Ed Attanasio

In the land of four-foot pizzas, pasta cooked al dente each and every time and breathtaking scenery everywhere you look, Autocarroseria La Pigna in Longobardi, Italy, is a second-generation shop with five employees that recently celebrated its 52nd anniversary.

While I was on vacation in Italy this summer, I decided to interview a shop owner to get a glimpse of the collision repair industry there and to, hopefully, deduct some of my trip on my taxes.

When my cousin and tour guide, Frank Aloe started asking around for the best shop in town for an interview, most mentioned Autocarroseria La Pigna. Who needs Yelp? I thought. The old word-of-mouth has been the best way to rate any business for centuries; so, when I walked into this immaculate shop, I was fairly confident that it would be one of the area’s best collision repairers.

My cousin speaks fluent Italian, so I had a good interpreter for the interview. In addition, he knows nearly everyone in my family’s hometown of Longobardi, in the Calabria region of Italy (pop. 2,200). During the one-hour interview, I realized I wasn’t getting a full translation from my cousin every time. Whenever I asked La Pigna’s Owner, Raia Maurizio, a question about topics such as DRPs, OE vs. aftermarket parts, etc., his responses were rather lengthy. But, each time my cousin would offer me a one-sentence answer. I knew this wasn’t going to be easy and thought I should have tried a little harder to learn some Italian before embarking on this trip.

Maurizio’s father, Rocco, purchased La Pigna in 1989 until he stepped aside and gave the reins to his son a few years back. His dad passed away earlier this year at the age of 75, but he taught Raia the right way to fix cars without cutting corners. Today, Maurizio’s wife, Luisa, runs the front office to accommodate the shop’s growing clientele. Three years ago, he doubled the size of his facility when he acquired the mechanical shop next door, so he needs a steady flow of work to pay the bills, he said.

View the embedded image gallery online at:
https://www.autobodynews.com/index.php/ed-attanasio/item/18392-pasta-pizza-and-la-pigna-a-body-shop-vacation.html#sigProId7bfcafb4c9
More in this category: « Too Many Openings & Too Few Techs—A Crisis With No End in Sight Yelp Experts Yelp Back About Billion Dollar Bully »
back to top