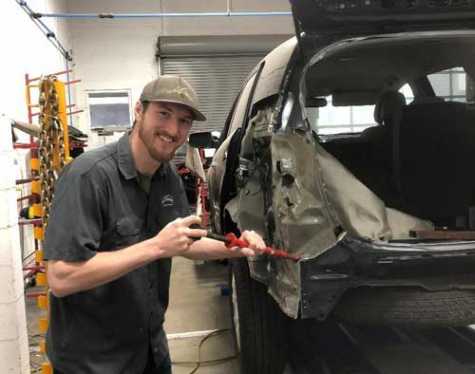 In February 2017, Kristopher Muse graduated from Mike's Auto Body's training program in Antioch, CA, and is currently working at the company's Vallejo, CA, location as a metal technician.

Kristopher Muse, a metal technician at Mike’s Auto Body, is only 25, but he has been playing the bagpipes for 14 years and is a member of one of the largest nationally acclaimed bagpipe bands in the country.

Muse joined the Prince Charles Pipe Band (PCPB) in South San Francisco, CA, when he was only 11. J.W. Bill Merriman, former member of the City of San Francisco Caledonian Pipe Band, taught him the art of bagpiping. The band, which began with a small number of students, has trained approximately 500 pipers and drummers and has been competing in the U.S., Canada and Scotland for more than 50 years.

To be a good metal technician and excel as a piper, Muse knows training is the only way to get there.

"To fix a car properly, you have to be thinking and multi-tasking all the time, and playing the pipes is very similar," he said. "We have to memorize the music, and there are a lot of different things going on when I'm piping."

In February 2017, Muse graduated from Mike's Auto Body's training program in Antioch, CA. He is currently working at the MSO’s Vallejo, CA, location as a metal technician.

"To complete the training program at Mike's, I went through a lot of classroom instruction along with performing hands-on repairs on metal, plastic, panel removal and vehicle construction on salvaged vehicles. After I completed the program, I had already earned I-CAR Training Pro Level 1, and I am now also fully Car-O-Liner-certified. The director of the program is Lupe Algood, who is an amazing teacher who sets up all his students for ongoing success in this industry."

Since Muse’s graduation from the program, Algood has watched him progress within the company.

"When he entered the program, he didn't know much about cars, but he has worked hard to learn the trade, and his focus is incredible," Algood said. "He is a hard worker and stands out for his commitment to the company and the craft."

After graduation, Muse went through Mike's Auto Body's mentoring program, shadowing journeyman techs and learning the trade by doing it all himself.

"It's great working with someone who knows what they're doing," he said. "I've had two amazing mentors, Jim Dowton and Gary Bissitt, who are awesome teachers. I am currently working with Gary at Mike's Vallejo location, and I learn something new every day. In three or four years, I hope to become a journeyman technician and continue on this path."

View the embedded image gallery online at:
https://www.autobodynews.com/index.php/ed-attanasio/item/17090-day-job-night-job-fledgling-auto-body-technician-is-well-known-dedicated-bagpiper.html#sigProId744fd18666
More in this category: « Team-Building Events Make Your Business Better on Many Levels After the Donation: Caliber Collision, Allstate Step Up to Help Army Veteran »
back to top