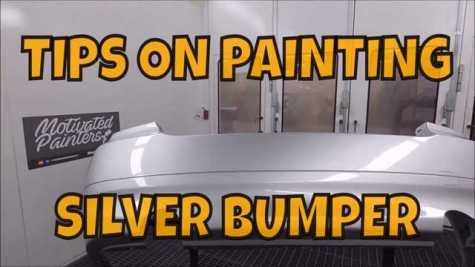 Gabriel Merino, 29, works at Budd's Collision Services in Oakville, Ontario, Canada as the head painter. Like any quality painter, he focuses on the details while pushing the envelope and creating a pristine finished product every time.

However, this 10-year veteran of the collision repair industry has an additional mission: to help painters worldwide through an organization called Motivated Painters.

What started out with one simple video that he produced on his cell phone back in mid-2016 has grown at a rapid rate to now include 171 different videos with more than 750,000 views. In addition, he has established a brand with Motivated Painters that includes a line of apparel and is marketing products to his subscribers. Painters from 128 different countries have flocked to Merino for help, inspiration and---that's right---motivation. It's a role this young man has embraced as he helps new, and even seasoned, painters do a better job with passion.

Born and raised in Ecuador, Merino's family moved to Canada when he was 16, where he now resides with his wife, Johana. He's a self-improvement devotee and is constantly listening to podcasts and audiobooks as he continually tries to become better at everything he does. His current mission is to help painters find what inspires them and tap into it.

"I am currently working on my dream and pursuing the things that I'm passionate about," Merino said. "I love helping people, and strongly believe in outrageous giving and purposeful living. I want to create value for people wherever I can, and now I am committed to adding value to the automotive refinishing community through all the avenues available to me. Bringing value to the people around you is the biggest investment you can make in your life, and that includes family, customers and other painters, in this case."

As a 19-year-old breaking into the collision repair industry, Merino landed a job at Budd's Collision with literally zero experience.

"I was anxious to learn, and my enthusiasm was eventually recognized by my boss," he said. "I would describe myself as a clueless, relentless kid during that time. At first, I didn't even know what sandpaper was, so I was definitely a total rookie. They assigned me to a veteran prepper and told him I knew nothing, and that whatever I was going to learn would have to come from him. So my journey began by cleaning toilets, floors, booth walls, filters and everything else imaginable."

Merino worked hard and kept his head down, and eventually it paid off.

"After a while, I started to understand what a red scotch pad was and figured out how to not cut my fingers on the inside of hoods anymore,” he said. “The shop was very busy and had five preppers, so I bounced around from one to the other learning things that I have never seen or heard before. As a person of faith, I believe that in every situation you must take the good and leave the bad, so that's what I did during those first few years at Budd's."

"The head painter at Budd's decided to move on," Merino said. "That very same day, the boss came up to me and said that he was finally going to give me a shot in the booth. I have to credit the boss, Sam Piercey, for giving me a chance. I knew that I had to come through for him, because [I may not have gotten] a second chance. I've been here for 11 years now, and it has been a great experience."

To communicate with other painters, Merino began producing videos---first with his Android phone and then with a GoPro camera, he said.

"I started to make videos showing the struggles I was having with painting and techniques,” he said. “I was shocked that even one person would watch my first video. I didn't have a clue about how to do it and the video is terrible, but it's still up on YouTube. After a while, I got better at it and the production values improved."

Merino is now on a mission with Motivated Painters and delighted to see that the movement is gaining momentum.

"This industry needs more people helping each other and I have always believed that together we are stronger, because collaboration is much better than competition,” he said. “Motivated Painters is a win-win situation. With so much new technology and social media outlets out there, we need to stay ahead of the curve as an industry and make sure that we're all in the right boat for when the tide rises."

Now that Merino has established a following, he has bigger plans for Motivated Painters.

"I put my heart and soul into this, so I want to watch it grow even more," he said. "Every time a painter contacts me and tells me that my videos have helped them in any way, it is so satisfying---I can't even describe it. Motivated Painters is now part of my life and as long as I'm painting, I'll be right here doing this."

View the embedded image gallery online at:
https://www.autobodynews.com/index.php/ed-attanasio/item/14766-canadian-painter-starts-movement-with-motivated-painters.html#sigProId1da1bbab65
More in this category: « Too Many Shops Advertising When They Should Be Marketing A Cautionary Tale From a Career Painter »
back to top